This post is only tangentially related to food…in fact, it’s about the vessels in which we serve food (though it’ll take a little while to get there).

Back in the early sixties, it was cool to have a connection to England, the land of the Mods and Carnaby Street and Twiggy and Mary Quant and Davy Jones and, best of all,  OMG–THE BEATLES!!!

My Mum, who had…until this point…seemed like just another suburban mum, was apparently the only Brit in the neighbourhood. Suddenly, my siblings and I all felt like we had a special connection to the coolness of The Beatles because our Mum was BRITISH.

And my Mum LOVED The Beatles.

Every afternoon, I’d arrive home from school, and my older brothers would be blasting The Beatles on the stereo, and my Mum would be singing along in the kitchen as she prepared the evening meal.

Indeed, I think my Mum was delighted that her place of origin was suddenly cool to not only her children, but also the entire neighbourhood.

Of course, she grew up nowhere near Carnaby Street in London, but just a stone’s throw  from Liverpool, where The Beatles apparently lived. Her place of origin was Stoke-on-Trent, commonly known as “The Potteries” because it’s the centre of the British ceramics industry, which includes Wedgewood, Spode, and Royal Doulton.

As a result, my mum was a FANATIC about china (I told you we’d get there eventually), and she was particularly proud of her Susie Cooper “Marigold” china.

Susie Cooper was a ceramic artist, who emerged in the late 1920s and, from what I gather, became the equivalent of a lifestyle guru for the time–a kind of Martha Stewart of The Midlands. She was incredibly prolific and seemed to have an innate ability to reinvent herself and set trends every decade until very near the end of her life. Her “brand” was apparently, “Elegance with Utility,” and though I had little appreciation for her work when I was young, I now find it quite lovely.

Anyway, when my parents were moving into their retirement home, my mother gave me her precious Susie Cooper china, and though the last thing I needed was more china, I felt the gesture was an enormous honour. I brought it all up to the cabin and promptly forgot about it, until I eventually unpacked the box and set the table.

To my great surprise, the china, with its deep yellow colour, and simple single marigold design seemed made for our little cabin with its semolina walls and wooden floors and furniture.

It looks so sweet and simple inside… 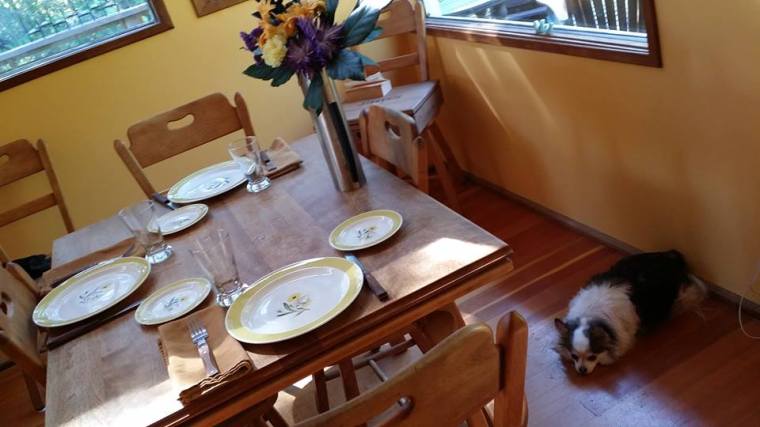 …and equally lovely outside on our deck.

Alas, one of the tureens was broken last week (just the bottom…apparently, I broke the lid when I was twelve), but I simply didn’t have the heart to throw away the shards. James gathered them up and placed them in a plastic bag that I stared at for about a week before I decided to make the remains into a mosaic.

Now, you may be wondering whether I know how to create mosaics, and the answer would be “no,” but that didn’t stop me from watching about fifty videos and finally just kind of jumping into it. I figured that even if I had to bin the whole project, it wouldn’t be a loss since I would have thrown the broken china away anyway.

So….we picked up a patio stone at Home Depot and a few mosaic tiles, tile cutter, and glue and I just went for it. The difficulty was that the patterned part of the tureen is raised and couldn’t be sanded down (believe me, I tried…I even used a dremel tool).

First, I glued down the shards and created a loose kind of pattern for the mosaic: 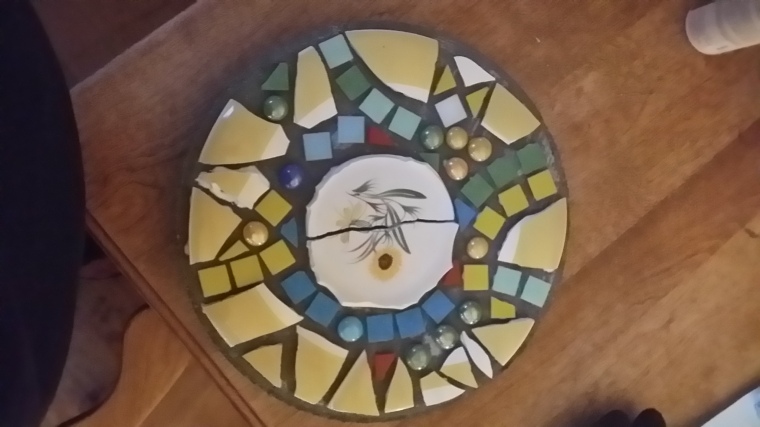 Then I grouted it with household grout. I did buy the fancy “art” grout, but I tried it on a practice mosaic and realized I would have nowhere near enough. Here’s my practice one:

Anyway, you just kind of smush the grout all over and then when you’re sure it’s in every crevice, you start scraping it off….

Then you go over each piece with a sponge to wipe off the excess grout. The more you get off, the easier it will be later on.

Finally, you wait a bit until the grout is mostly set and then wipe off each little shard or tile with vinegar until it’s nice and shiny…

I’ll eventually cover it with a coat of verathane, so I can leave it outside. In retrospect, I think it would have looked better with a black grout, but I’m still kind of pleased that I was able to preserve something that means so much to my Mum…and, in fact, to my whole family. I once posted a picture of a meal I’d made on Facebook, and one of my brothers immediately posted, “The Susie Cooper looks great!”–a comment James found hilarious because he claims that china patterns were definitely not a topic of discussion in his family (and had no idea what his mother’s china pattern was when he was growing up! I’m shocked, I tell you!!!). To this day, my sister and I will turn a piece of china over to see where it’s made, another Pooleyism that James finds strangely puzzling.

Oh, and and as for my Mum and The Beatles, she was devastated when they broke up in 1969, but I still do imitations of her explaining various Beatles lyrics to the ten-year-old me. Here’s an example.

Me: Mummy, why does Lady Madonna have a different man living with her for each day of the week?

Mum: Well, darling, she was a prostitute, wasn’t she?

I knew what a prostitute was because Biddy once called me one as we made the bed together. She wouldn’t tell me what the word meant, so I asked my Dad.

Without lifting his eyes from his newspaper or even asking my ten-year-old self why I wanted to know, he said, “It’s a woman who sleeps with a man for money.”

And of course, not knowing what sex was and assuming that nodding off was the only requirement, I thought, “Well, that sounds like a sweet deal!”

4 thoughts on “Susie Cooper…and The Beatles”