I LOVE cornbread, but apparently many people don’t. Whenever I say, “And I can make cornbread!!” to go with a soup or stew I’m making, James always looks vaguely stricken and asks, “Will there be….corn in it?” I once made it for a group of youngsters who were up at the cabin, and my nephew, who’d never tasted cornbread before seemed not just to hate it, but to be offended that such a food existed.

These rather damning responses to my cornbread caused me to rethink the recipe. I found the recipe below on Dr. John McDougal’s site.

It was delicious…and even James liked it! I doubt I can convince Stefan to give cornbread another try though.

Preheat oven to 400F. Whisk cornmeal, flour, baking powder and salt together in a large bowl. Add non-dairy milk, applesauce, maple syrup and sugar, if using, on top. Using a spatula, stir until just combined. Pour batter into a nonstick shallow 9″ pie dish, or other oven-safe dish. Bake for approximately 35 to 40 minutes or until a toothpick inserted into the centre comes out clean. It should read an internal temperature of 194 to 200.

I left out the sugar, but included the maple syrup (which really makes it). It’s moist and lovely–hard to believe that there’s no oil in it at all!

I served it with a delicious lentil-vegetable stew, which is a variation on my favourite lentil soup. 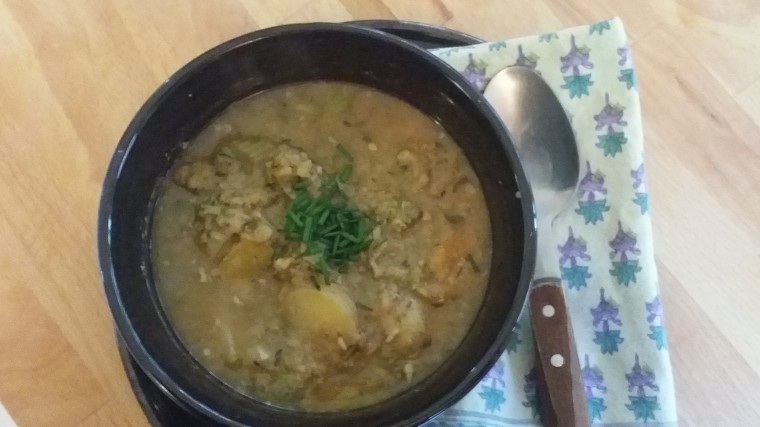 Spray a dutch oven with a bit of olive oil, and saute for a few minutes:

Simmer until the lentils are soft and mushy and the carrots are tender but not mushy (30 – 45 minutes).

This is so good that I woke up thinking about it and had another bowl (and another piece of cornbread) for breakfast. You’ll notice that the picture above is topped by chopped chives, not because the recipe calls for it, but because lentil stew (or soup) always looks like the dirt soup Em used to make (made of sand, mud, pickle juice, mustard, and rocks–presumably for texture). She’d sob great tears of betrayal when we refused to taste her soup. When we’d suggest she try it herself, she’d look appalled and say, “But you know very well I don’t like soup!” You’ve got to love the logic of the three-year old.

In any event, my chives were a fluke this year. I always grow them, but we rarely use them in anything we cook, so I decided not to plant any this year. Chives are tenacious plants, however–when I was planting other seeds, I noticed a few little patches of chives that had made it through the winter in my vegetable boxes. I collected them up and planted the bedraggled-looking things in one pot and proceeded to neglect them. Surprisingly, they grew abundantly and have yet to bolt (though I never mind chives bolting because the purple flowers they produce are so lovely on the dark green stalks).

One thought on “Vegan Cornbread and Lentil-Vegetable Stew”