So I’ve been making J a big batch of buttermilk pancakes every morning (using his favourite Auntie J’s “complete” mix–haha), and then last evening he had a craving for a nice big oatmeal cookie, so I made a big batch from this Cooks Illustrated recipe that he favours. 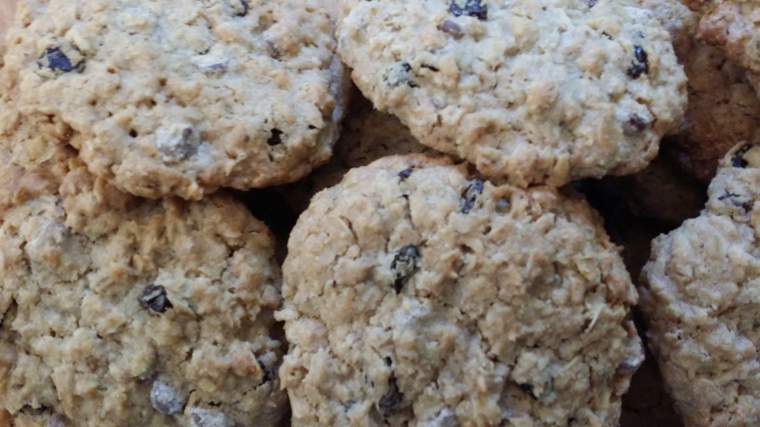 And though I loooove both pancakes and cookies, I’ve been really good about resisting….until today when I couldn’t stand it and decided to find a good, simple (and healthy) vegan pancake recipe.

As I was perusing Dr. Internet for the perfect recipe, I kept coming across ones with extensive ingredient lists–stuff like four kinds of flour and “flax-seed egg replacement”–one even had seventeen ingredients.

I was about to give up, when I found this very simple recipe, which I doubled because I didn’t want half a banana sitting around in the fridge until I threw it out three days from now. It was simple to make and the double recipe made six nice-sized pancakes (though according to the recipe, this much should make about twelve pancakes).  They cooked up nicely–pretty much like a regular pancake, and I served myself a nice little plate of two. They tasted okay….a bit mushy in the middle, but, with a dot of maple syrup, close enough to the real thing for me to forget my craving.

And then I thought I’d quickly figure out their calorie count because, as my brother, Mark, always says, people on diets always seem to try to figure out a way to lose weight without having to calculate calories, and it never works.

Anyway, as it turns out, dry oats (the central ingredient in this 3-ingredient concoction) are extraordinarily high in calories. Each of these suckers weighs in at a hearty 173 calories, AND THAT’S WITHOUT SYRUP. And let’s not forget, these were meant to be a healthy, low-calorie substitute for the real thing. And, of course, I calculated this while I was eating, so the dogs got the second pancake.

As it turns out, I could have eaten two of Auntie J’s buttermilk pancakes for fewer calories than ONE of my healthy, vegan pancakes. Hell, I could have eaten one of J’s HUGE oatmeal-raisin-chocolate-chip cookies for LESS than two of the healthy pancakes, and, as J just said, “You’d have been much more satisfied! Those suckers fill me up all afternoon!”

Mind you, I swear there’s a stick of butter in every cookie…