So I was FINALLY able to take some time to browse through my new cookbook–Isa Does It. Bid was over from Hornby for dinner last evening and brought us some lovely corn, which we’ll be having for dinner today. Since a couple of cobs of corn can really fill you up, I figured we’d have a hearty soup for dinner, rather than anything more substantial.

As you likely know by now, I’m a sucker for anything that tastes like cheddar cheese, so this recipe for “Cheddary” Broccoli Soup really appealed to me. Plus, it’s not too fussy and tastes freakin’ unbelievable. Seriously, this soup is the bomb.

Ingredients for the Soup:

Ingredients for the cashew cream:

After it’s all blended:

Sauté the onion in the oil with a pinch of salt until softened, about 3 min. Add the garlic and sauté for 30 seconds or so, until fragrant.

Add the broccoli, carrots, turmeric, remaining 1/2 tsp salt and broth. Cover and bring to a boil. Once boiling, lower heat and simmer for about 10 minutes until the carrots are very tender.

In the meantime, make the cashew cream by draining the cashews and placing them in a blender/food processor with the broth, miso and nutritional yeast. Blend like crazy, until smooth. Normally, I’d use my Magic Bullet, but this seemed a bit much for it to hold, and my-best-friend-Isa suggests it can take up to five minutes to fully blend. As I mentioned in an earlier post, the most participation I can take with the bullet is about a minute, so I threw it all in my big blender and walked away for a few minutes.

When the carrots are tender, add the cashew cream to the soup. Use an immersion blender to puree the whole thing. Keep the soup on low heat, partially covered for about 10 minutes, until thickened, stirring occasionally. 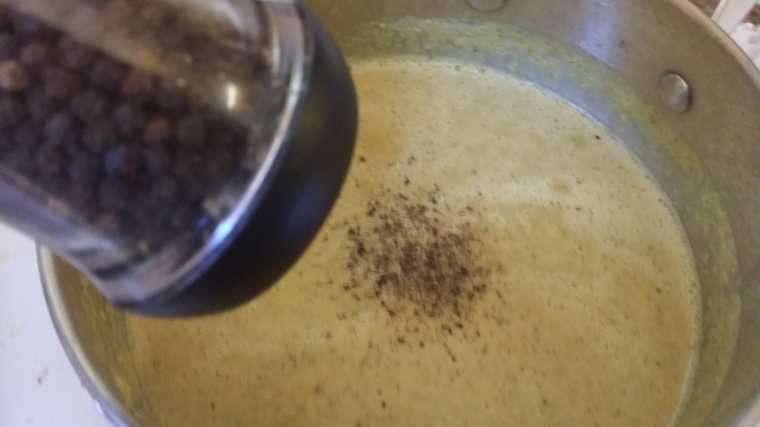 Once thickened, add the lemon juice and pepper, taste for seasoning, and serve.

And OHMYGOD, THIS IS THE BEST DAMN SOUP I’VE EVER TASTED. Seriously…12/10.

And speaking of the deck garden, my zucchini is coming along very nicely, but I happened to watch a very short video that explained that some zucchinis may end up turning yellow and not growing properly because of improper pollination.

As it turns out, zucchini produce both male and female flowers, and, to ensure proper pollination, you’re supposed to pick one of the male flowers (evident because of their thin stems), peel off the flower petals, and stick the stamen into the female flowers.

I figured we had enough bees and wasps taking care of the pollination, but a couple of the zucchini did seem to suffer from this problem.

So this morning, I was talking to my ninety-one-year-old mother on the phone when I noticed that the sun was getting hot. Worried that the flowers would soon close, I snipped off a male flower, peeled off its petals and began pollinating the female flowers.

I guess I sounded distracted because next thing you know my mum says, “What are you doing?”

Yeesh–that brought back my teenage years in a flash!

Anyway, the rest of the zucchini are growing very nicely, so I guess they managed pollination without my interference. 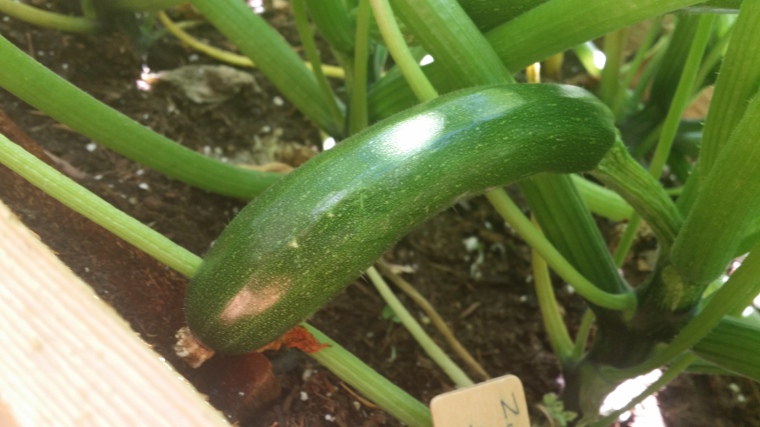 And as I was taking the picture below, a tiny frog jumped into the picture (lower, right quadrant)…the little fellow must have picked up Buster’s photobombing tendencies.