So we’ve been up and the cabin for eight days, and though our intention was to go into town at some point to replenish supplies, the Denman inertia set in, and we ended up getting by with what we had. Tonight’s our last evening at the cabin, and an inventory of the larder reveals the following items (some of which are from the surprisingly still-producing garden):

The rosemary, parsley, kale, arugula, and Swiss chard are from the garden, and the rest is what we brought up, but haven’t yet gotten around to eating.

To be honest, I really thought I was screwed until I Googled the combination of butternut squash + parsnips + stew, which produced a surprising number of options. The following stew is a conflation of a number of recipes, but relies primarily on this Autumn Vegetable Soup from FineCooking.com

We added lima beans AKA butter beans (because that’s what James’ culinary idol, Denis Cotter, calls them…oh, god, now I’m having Cafe Paradiso flashbacks). And speaking of James, here’s why preparing food with this man is so damn enjoyable:

And here’s the other reason…

And these are only a fraction of his collection! Mind you, now that I think about it, the man could just be a maniac.

Anyway, here’s the recipe for…

Spray a large pot with cooking oil and brown…

…for about five minutes until soft, then add and brown for another minute:

Then add the following and stir:

Bring to a boil and then simmer for ten minutes. 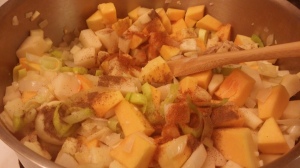 Bring to a boil again, and simmer for another ten minutes. Then, scoop out about a cup and a half or so of the potatoes and blend with…

…and stir it into the stew to make it nice and thick.

Serve with these rosemary biscuits from Oh She Glows! (another awesome vegan website–indeed, James just ordered her new book yesterday!). Ms. Oh-she-glows calls for half whole-wheat flour and half white flour, but I ran out of whole wheat… 😦 but really :). I couldn’t believe we had all the ingredients, including fresh parsley, rosemary, and thyme, AND Daiya shredded fake cheese.

Now the biscuits were the real surprise because they turned out UH-mazing. I was not holding out much hope for these because 1) I have never made a tea biscuit that didn’t have the texture and taste of a hockey puck, 2) making a vegan version of a hockey puck could only spell trouble, AND 3) the process seemed a little wacky (see freezing the coconut oil). Oh, and when I was dropping them onto the baking sheet, the pea-sized hunks of coconut oil seemed rather prominent. However, they turned out very well indeed!

And we’re listening to Madeleine Peyroux this evening. I’ve always loved her cover of Elliot Smith’s “Between the Bars”:

And here’s the original because…Elliot Smith, that’s why!