So when I first started sprouting, I bought a variety of sprouting seeds, including sunflower, which sprouted very well, and produced a hearty little sprout. I used the Mumm sprouting seeds, which were great in that most seeds sprouted and very few were duds: 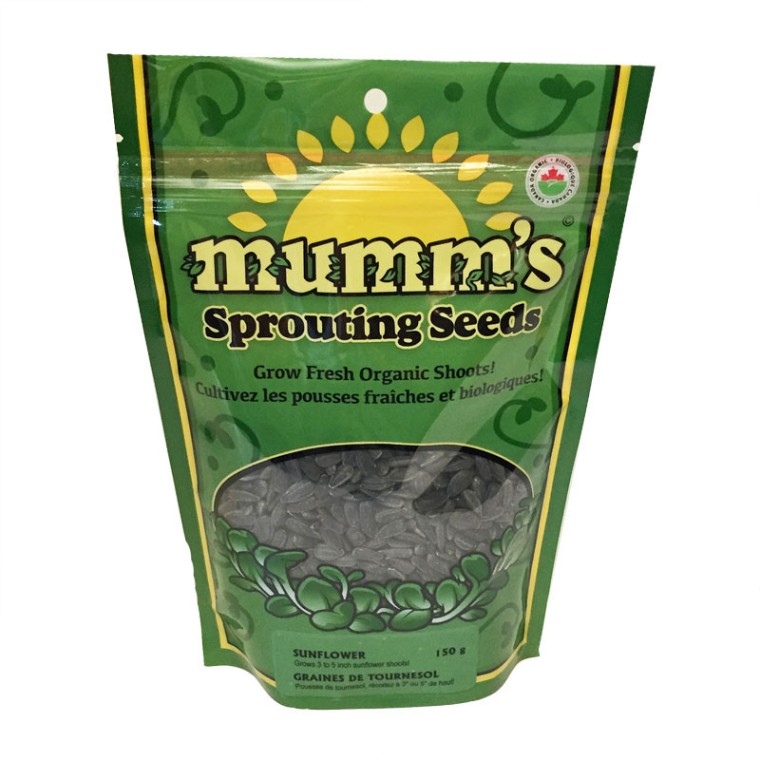 However, once sprouted, they were far too labour intensive (and this is from the chick who hand peeled two cups of chickpeas!) because every little shell had to be tugged off every little sprout. I finally pronounced the sunflower sprouts “dead to me” (in the words of the ever-eloquent James), and cast my sights on lower-maintenance sprouts.

When Bid arrived home from Hawaii, however, she was raving about the sunflower sprouts they would buy at the local markets there and asked me why I didn’t sprout sunflowers. I mentioned the issue, and she suggested sprouting raw, shelled sunflower seeds. I immediately dismissed her suggestion because…in retrospect, I have no idea. I just assumed that the shells were necessary.

Anyway, I’ve been sprinkling my breakfast fruit salad with raw sunflower seeds and thought, what the hell, a couple of days ago, and threw a handful in a sprouting jar.

Lo and behold: THEY SPROUTED! 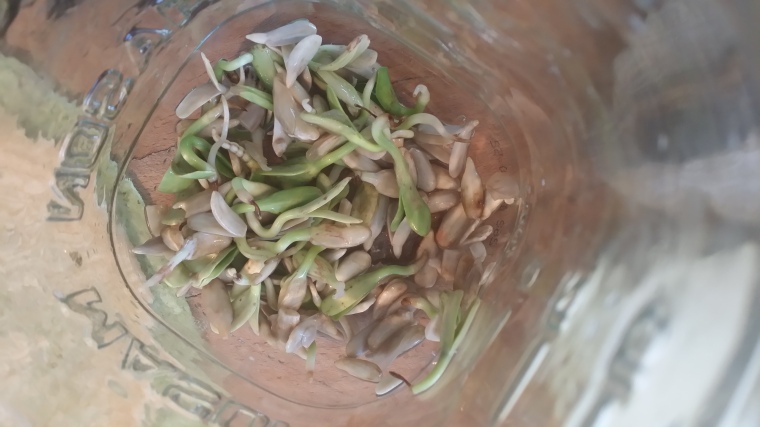 The odd thing is that while some sprouted very quickly, others are lagging behind (as you can see in the picture). As you can also see, the sprout-tails are thick, so I’m going to leave them for a few more days in the hopes that they grow to something resembling a mung bean sprout: 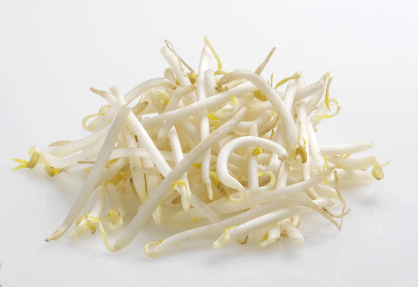 The other cool thing I recently discovered is a quick way to peel chickpeas. A couple of years ago, Annie mentioned to me that the best hummus was made with peeled chickpeas, so I spent about half an hour hand peeling a few cups of chickpeas. The result was deliciously smooth, but the process was FAR too labour intensive.

However, when I was draining and drying a can of chickpeas for baking, I noticed that when I rubbed a towel over the chickpeas in the mesh colander, the peels seemed to pop off easily and just had to be picked off. It’s the friction of the mesh: 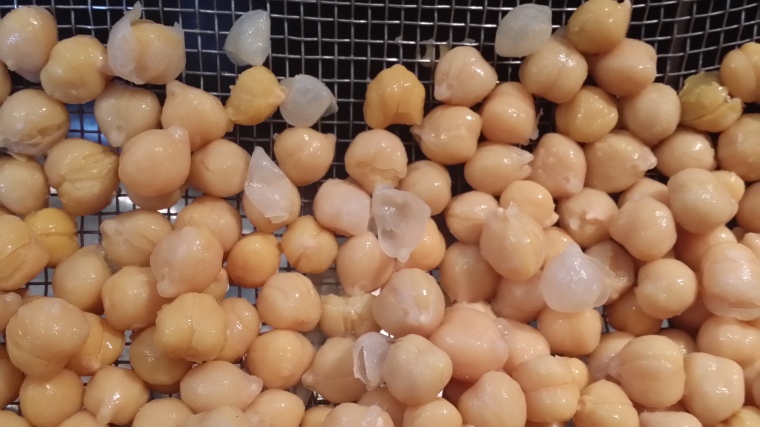 The result is a super smooth hummus, and worth the couple of extra minutes (but not the half hour of hand picking!!). James keeps saying, “Why is this so smooth?!” every time I use this method, so clearly it works.

The only canned beans I’m super picky about are chickpeas because different brands are better than others, and the price is no indication of quality. Some brands are too mushy and other brands are too hard and no matter how long you process the beans, they never become smooth.

I’ve recently discovered these Western Family unsalted ones, however, and they are the bomb: perfect texture, not too much liquid, great taste…and they even appear to be sprouted!

Now…don’t these look like little sprouts to you? Yeah, yeah, the picture is blurry, but look at those tiny little tails! 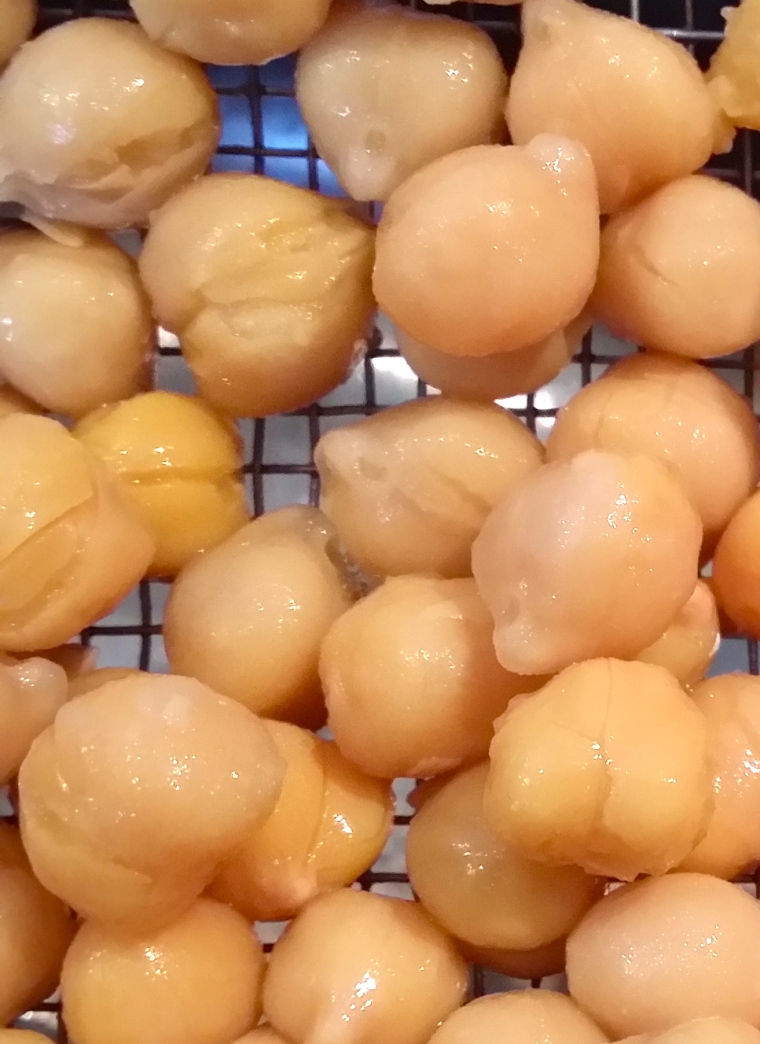 My curiosity finally got the better of me and I e-mailed the company to find out. Alex from the Overwaitea Food Group (always thought that company name was unfortunate) said the following:

“The description of our product is that the Chick peas are of uniform size, slightly cracked, a slightly dull yellow gold color. It has a typical taste of chickpeas, with a firm texture that is neither too hard nor too soft. To be able to achieve this texture, it is a balance between the hydrating time and the sterilization time. The time it takes to hydrate the dry beans, can lead to some of the beans to sprout. Thus there are some of the beans that will be sprouted in the final canned product. The sprouting is not intentional but a product of the processing procedure.”

Interesting that the sprouting is incidental to the supplier’s process because the sprouting vastly increases the nutritional value of the beans. I’ve often wondered why companies that produce canned beans don’t sprout them first, but assumed it would add too much time to the processing time. Anyway, I’m happy to know my favourite brand of chickpea is also (though unintentionally) sprouted!

Oh, and here’s the deconstructed wrap we had for lunch…just because it was SO delicious: 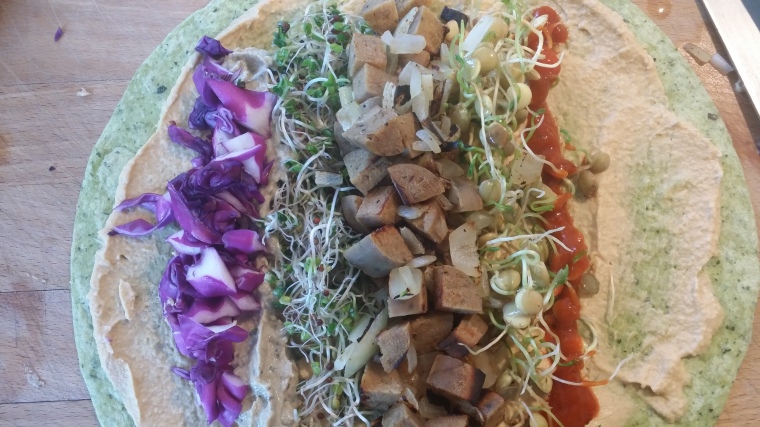