I’ve been listening (selectively) to the daily podcasts from The Food Revolution Summit, and one of today’s guests was Dr. Joel Fuhrman. I’ve been following Dr. Fuhrman for years, so I’d heard/read most of what he had to say before, but my big take away from his talk was the importance of including mushrooms in your diet:

“Mushrooms are unique in their breast cancer preventing (anti-aromatase) effects. Frequent consumption of mushrooms (approximately 1 button mushroom per day) has been linked to a 64 percent decrease in the risk of breast cancer.5 Mushrooms are thought to protect against breast cancer particularly because they inhibit an enzyme called aromatase, which produces estrogen. Mushrooms are one of the very few foods that inhibit aromatase (pomegranate is another), and several varieties of mushrooms, especially the commonly eaten white button and portobello mushrooms, have strong anti-aromatase activity.6

Indeed, Mushrooms protect against all cancers. Mushrooms contain specialized lectins (ABL) that recognize cancer cells, and prevent the cells from growing and dividing.7,8 In addition, white, cremini, portobello, oyster, maitake, and reishi mushrooms each contain a number of bioactive compounds with the potential for anti-cancer activity. These mushroom phytochemicals have anti-angiogenic, anti-proliferative, and other anti-cancer effects, which have been studied in relation to stomach, colorectal, breast, and prostate cancers.9-18″

Oddly, though I often use Dr. Fuhrman’s acronym–G-BOMBS (greens, beans, onions, mushrooms, berries, and seeds/nuts)–to test whether I’ve covered the bases at the end of the day, I invariably ignore the directive to eat mushrooms because I suppose I’ve never truly believed that a fungus could be that powerful an anti-oxidant. I mean…I like them fine, but whenever I decide to use them in a salad or recipe, the brown paper bag of mushrooms I’ve purchased weeks before have turned into wrinkled little old men.

However, yesterday we had guests for dinner and I prepared some small portobellos that were DELICIOUS. Further, they tasted amazing even when cold. Then this morning, I listened to Joel Fuhrman’s podcast and learned that mushrooms are best when cooked because cooking destroys their only downside (a slight toxicity). I was hooked.

So today, I hit Donald’s Market and picked up some cremini and white buttons and cooked up a batch to top salads and incorporate into wraps. The main problem is that I bought about five bucks worth of mushrooms, and, after cooking, the yield is pretty small. I could eat the entire cooked batch in one sitting, but, if I don’t want to spend five bucks a day on shrooms, I’ll need to ration myself to a few a day!

So here’s the recipe!

I made an adapted version of my favourite Thug Kitchen tofu marinade because I figured the mushrooms would be the bomb-diggity after soaking in this stuff, and….OH MY, was I ever right!

Just throw the following ingredients in the bullet and blend for a minute.

Then clean and slice the mushrooms… 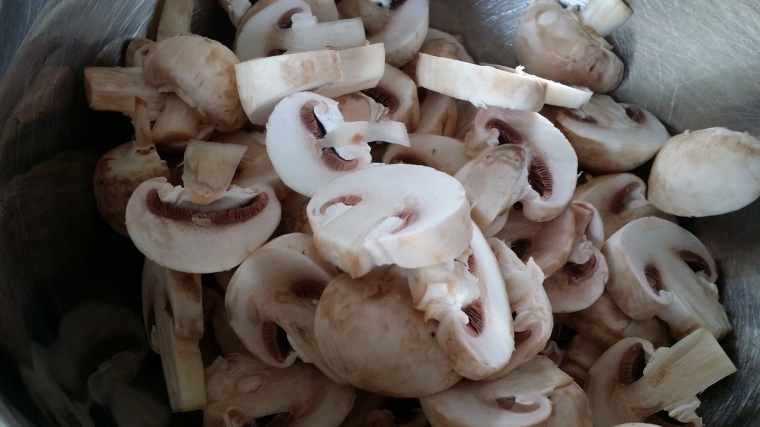 Next, let them marinate for an hour or two….

Next, throw them on a grill, and keep those little suckers moving around… 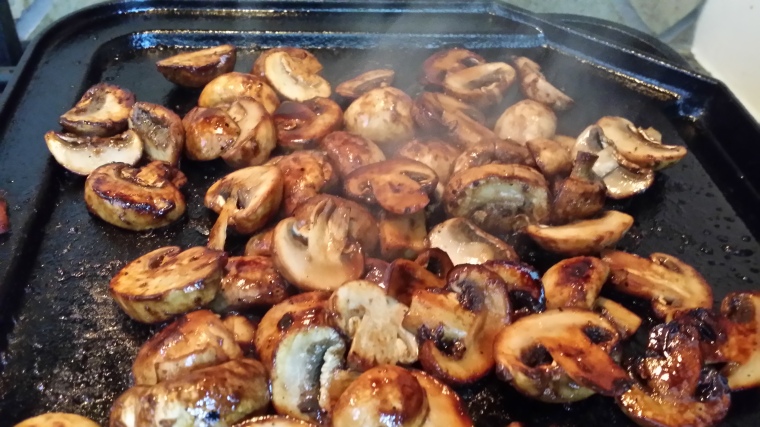 Keep them in the fridge and use them in wraps or salads or sandwiches….or whatever your heart desires! They are actually better cold (for some bizarre reason), so my plan is to just grab a few every day to top whatever savoury thing we happen to be eating for lunch or dinner. This evening, we had a big arugula, iceberg, mixed green, onion, and purple cabbage salad topped with these mushrooms, barbecued jackfruit, shredded carrot with raisins, cucumber, avocado, grape tomatoes, broccoli sprouts, and cashews. I also topped it with chia, sunflower, pumpkin, flax, and sesame seeds. The dressing had chickpeas in it, so I covered all the G-BOMBS…except berries (ACK–I should have added some frozen blueberries!!!!). Anyway, it was SUPER delicious and took forever to eat!

And then there’s dat mushroom tho…

I sent a picture to my nephew, the hilarious Twitter comic,  Stefan Heck, and he replied, “It’s Shiitakim Kardashian!” His mother (Bid) called it an “ashroom.”

And, in honour of this deviant mushroom, the song of the day is the 1992 Sir-Mix-A-Lot classic, “Baby Got Back” (I can’t believe this song is almost twenty-five years old!!!):