A few days ago, I realized that though James and I have a plethora of vegan and vegetarian cookbooks between us, neither of us ever consults the other’s cookbooks.

James’s cookbooks are invariably fancy and vegetarian as opposed to vegan, and whenever we’re planning a dinner party, he spends weeks poring over a variety of multi-paged recipes (which always include various exotic, incredibly expensive ingredients). His recipe for Portobello Wellingtons with Madiera Sauce is a full EIGHT pages long. He usually makes it in stages…over three days (and I’m not even kidding).

My cookbooks, on the other hand, are invariably NOT fancy and are always vegan. My meals are usually planned around ingredients I already have and how much time I feel like spending in the kitchen. A number of my cookbooks have titles that include words like “quick,” “easy,” and “cheap”–hmmm…oddly similar to my blurb in my high-school yearbook (I’M JUST KIDDING, MUM!!!).

James’s cookbook titles never include these words. Nor do the titles include the words “painstakingly labourious,” “difficult,” and “expensive,” but, in truth, they should since the meal preparation is invariably labour intensive and onerous, and the ingredients exorbitant (I won’t mention the likely relationship to James’s own yearbook blurb, but you can draw your own conclusions).

Today, however, was a first-ever crossover day! James asked me to veganize a recipe from one of HIS books.

Now, I do love veganizing recipes, so he likely knew he could convince me to give it a try. Plus, the recipe seemed relatively straightforward since I’ve recently learned how to create vegan ricotta and vegan parmesan. In fact, once I broke down the recipe, I realized the meal is kind of a deconstructed version of the Vegan Canneloni I made just last week. Indeed, it’s really more of an assembly of a bunch of other recipes (as any lasagne is).

And in keeping with the Jamesian style of cooking, the process did take the better part of the afternoon, but the result was worth it!

This is very much a vegan meal that could be served to carnivores (and they likely wouldn’t even notice that it doesn’t contain cheese). It is VERY rich tasting and delicious.

6. Make the topping to sprinkle over the bechamel sauce.

Mix together in a small bowl.

8. Bake at 400 degrees for forty-five minutes. Let sit for ten minutes before serving. 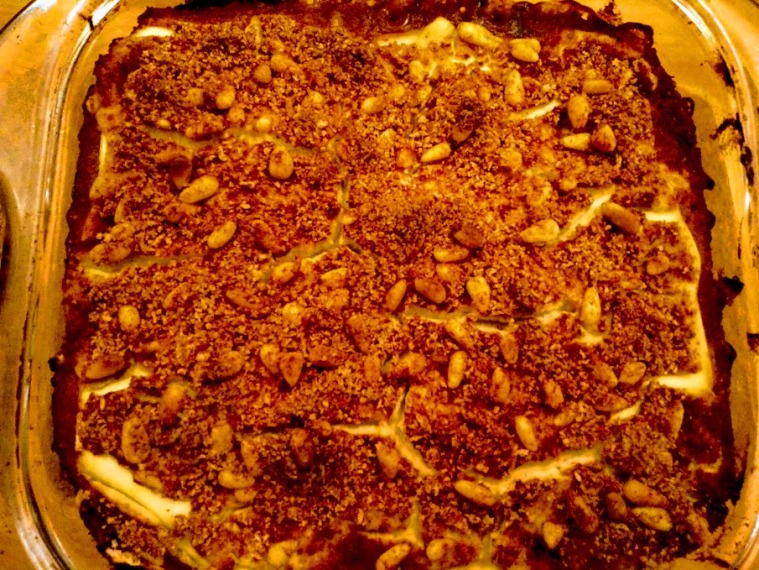 Serve with a crunchy salad and fresh baguettes!