My Irish hillbilly heart loves me some taters. Indeed, I’ll eat potatoes any old way: baked, hash-browned, mashed, you name it. Of course, the BEST kind of potatoes are deep fried, but we’re trying to be healthy, so we try to avoid those little flavour bombs of fat.

One of my favourite methods of cooking potatoes is from an Ottolenghi recipe James sometimes makes, which involves boiling chunks of potatoes and then tossing them into a chafing dish of oil that’s been heating up in the oven for a quarter of an hour (Ottolenghi calls for goose fat, rather than vegetable oil!!).

I wanted to make something similar, but without all the oil, so I incorporated some of Ottolenghi’s methods, but left out the oil.

Okay, full disclosure: this recipe isn’t ENTIRELY fat-free since I did spray the parchment paper with a quick coating of Pam.

Preheat the oven to 450 degrees.

Boil the potatoes until a fork goes in easily. Don’t overcook–the potatoes should be a bit short of what you’d look for if you were making potato salad.

Drain the potatoes and then shake them vigorously in the colander. This step is important because you want to give the potato chunks shaggy edges like this:

Spread the potatoes out on two baking sheets lined with parchment paper and sprayed with a bit of Pam (and, okay, you may as well give the potatoes a quick spray as well, so the broth powder adheres to them).

Sprinkle the potatoes with the Knorr broth powder.

Pop them into the oven for twenty-five minutes. Stir them around after fifteen minutes.

Here’s James’s plate with a side of Frank’s Hot Sauce for dipping!

I like to keep track of what I’ve done in the garden from year to year and this blog seems the best place to do so (though I acknowledge it’s likely of interest only to me!).

So, if you recall, I started my vegetables and flowers from seed under grow lights in early March and transplanted most of them outside in mid-to-late April.

2017 has been a particularly cold year so far, so the head start the grow lights gave me has been a life saver. Indeed, most years, I would just be starting to plant now, and many of my vegetable (and ALL of my flowers) would have been from plants purchased from the nursery, not seeds.

Anyway, my kale, arugula, and chard are AMAZING–indeed, I’ve been harvesting leaves every day for our evening meals!

The nasuturtiums and sweet peas are developing nicely, as are the marigolds, but the snap dragons are a bit of a disappointment.

I transplanted half my tomato plants outside on May 1st, and they’ve not grown an inch, though they seem to be holding their own. Meanwhile, the ones I left under the grow lights are ENORMOUS things, but I’ll report in greater detail on my tomatoes in a later post.

The zucchinis I started from seed  and transplanted outside are holding their own and even growing, but the cucumbers (of which there are only two) are stunted little things that seem ready to expire. James picked me up six cucumber plants in town to replace them, so we’ll see how they do.

So the grow lights are ONE game changer.

The other game changer is that I’ve started using a moisture metre and have discovered that the reason my garden was such a disaster last year was that I was over-watering and killing all my poor little seedlings!

Now I jump out of bed every morning and rush out to the deck with my moisture metre in hand. I resist watering anything unless the metre indicates the soil is on the dry side of centre.

2. The 2-in-1 ph/Moisture Metre from Art Knapp’s Garden Centre on Marine Drive in Vancouver: 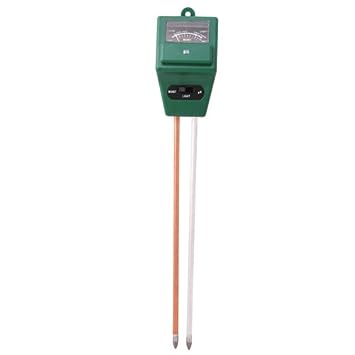 I actually bought this to measure the ph of my soil because I thought the problem with my garden last year was that it was too acidic. Apparently not, but it WAS too moist.

One thought on “THE BEST Fat-free Roasted Potatoes, a Garden 2017 Update, and a Couple of Gardening Game Changers!!!!”