My garden this year has been a joy, particularly when I compare it to last year. I was just looking at a post I made on my garden last year at the end of July and, other than romaine, nothing much was happening at all. Even my kale was pretty small.

This year, my kale and chard have been amazing–in fact, my chard is so big I’ve been making wraps out of the leaves. I picked two pounds worth yesterday for a recipe James was making. Unfortunately, it’s now a bit too hot for either one and they’re starting to fade.  In fact, every afternoon as the sun hits the chard, the largest leaves keel over in a dramatic swoon reminiscent of Aunt Pittypat in Gone with the Wind.

At the back of the cabin, the zucchini is going great guns… 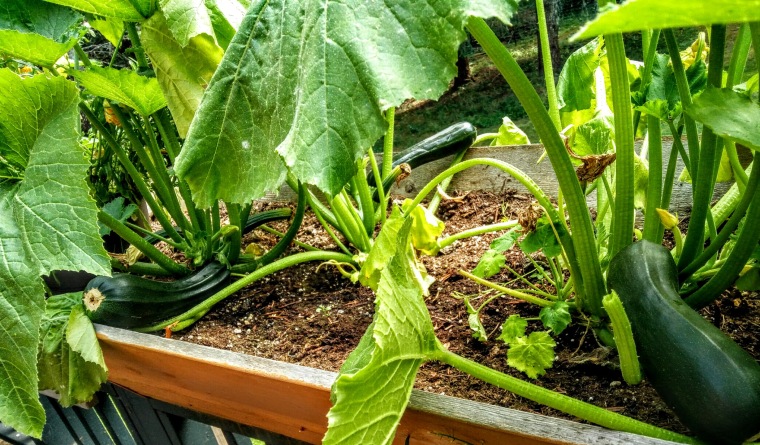 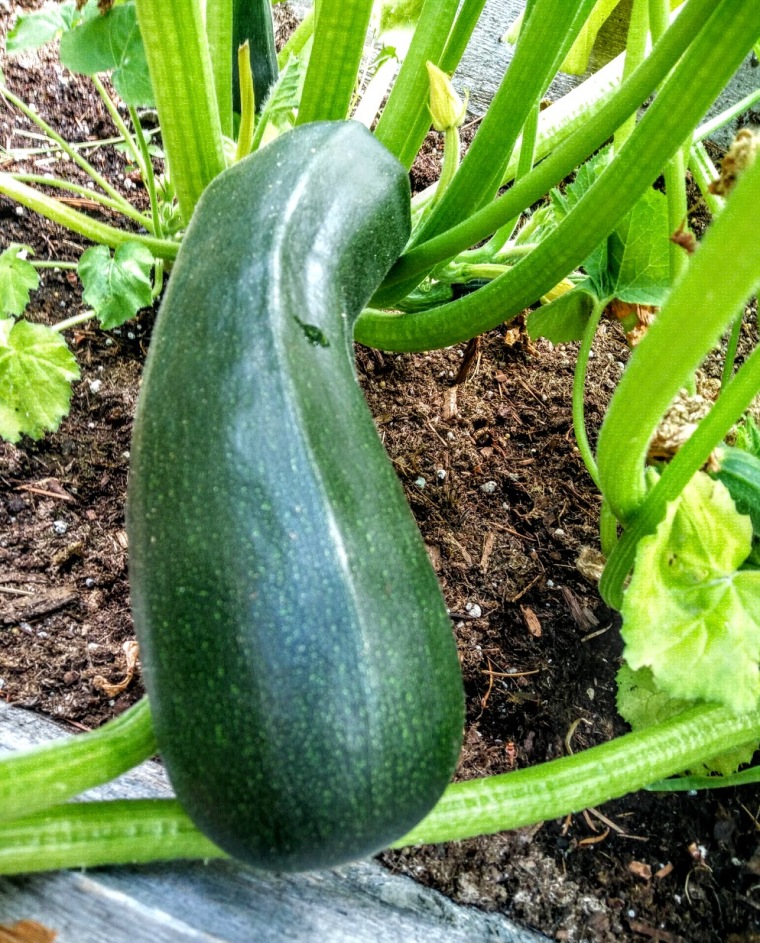 And my tomatoes may just be a success this year! I have about 23 plants, mostly sweet one millions, but also two sungold plants. All are cherry varieties. I started the sweet one millions under the grow lights in March and staggered their planting into three batches–each about three weeks apart. The group I hardened off first has many more tomatoes, but they’re much smaller. The ones I hardened off last have fewer, but they’re bigger. I think we’ll be eating sweet little cherry tomatoes within a couple of weeks. The sungolds won’t be ready until the end of August though because I didn’t start them until early May. 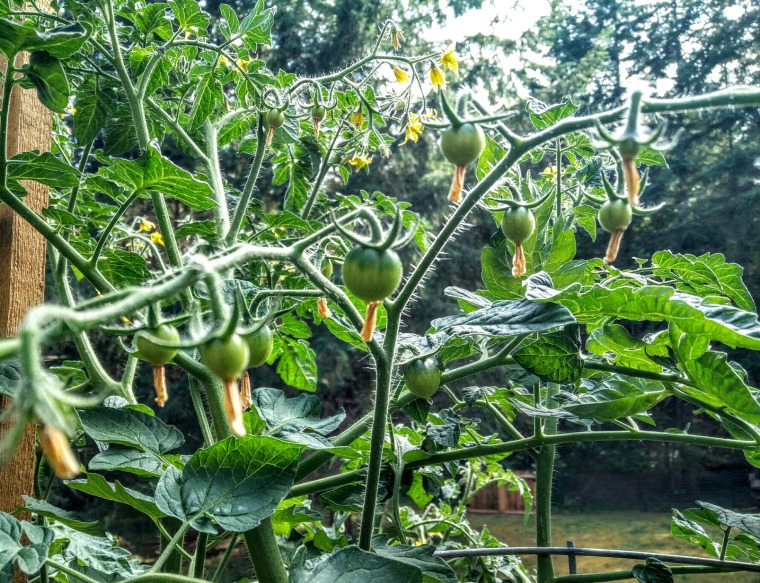 Even my little pickle cucumber plants are starting to produce (and they did not look promising earlier in the summer). 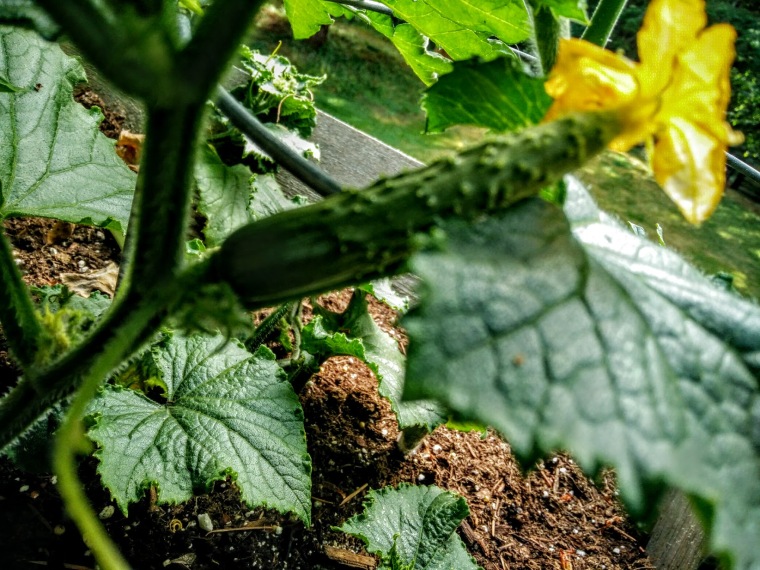 I’m also very pleased with the flowers–the nasturtiums continue to be gorgeous, as do the marigolds and sweet peas. And my snap dragons and zinnias are finally blossoming as well! 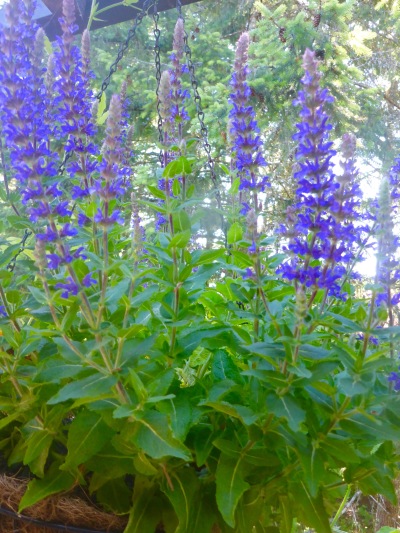 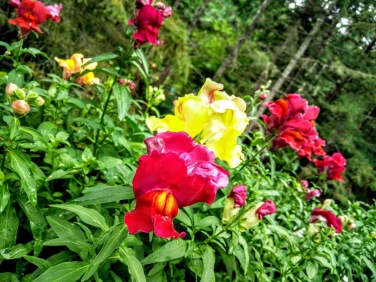 So desperate am I to spot this little sucker that I embarrassed James at Gravelly Bay last Sunday. We were waiting for the ferry to go over to the pub on Hornby Island where we were meeting people for dinner. James pointed out what he thought was a Taylor’s Checkerspot, but it quickly vanished from view. A few moments later it emerged again and headed toward the water. Of course, I dropped everything, yelled, “THERE IT IS!!!!” and chased it toward the water.  Happily, with retirement, I seem to have lost what little dignity I ever had, so the only one embarrassed by my little display was poor old James. 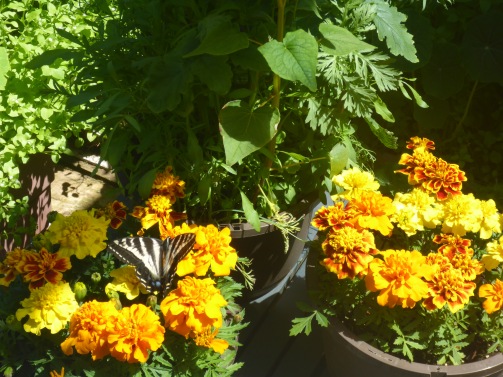 Pale Tiger Swallowtail on my Nasturtiums 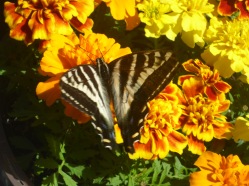 Pale Tiger Swallowtail on my Marigolds

The corners at the back of the cabin are looking lovely as well, though the snapdragons and zinnias are taking forever to bloom….

And the ivy I planted by the outdoor bath has filled out beautifully–I can’t believe I bought these plants as four little sticks last fall and they’ve turned into these lovely bushy things. I may have to trim back these nasturtiums because they (and the sweet peas) are starting to look a bit like a jungle.

Oh, and the other end of the front deck from the butterfly corner is populated by my parents’ deck furniture. They gave it to us three years ago when they moved into their fancy seniors residence. The furniture must be twenty-five years old, but it’s still in perfect condition because my mother always took such good care of everything (this is the woman who had a dishwasher last FORTY years!). She used to take in the patio chair cushions every night and put them in a special Tupperware trunk to keep them moisture free. I wish I could say we were as conscientious!

Finally, the little patio at the front of the cabin is rather shady, so we’ve tended to just rely on geraniums (which I didn’t grow from seed). I did start a little wildflower garden just in front of the patio, but the seedlings are taking forever to grow because of the lack of sun. I’ll post a picture in late August if they turn out well.

And all these flowers outside are giving me lots of blossoms for centrepieces….though Bid and Paul were over for dinner on Friday, and Paul did balk a bit at the giant vase of flowers blocking his view of everyone else at the table. 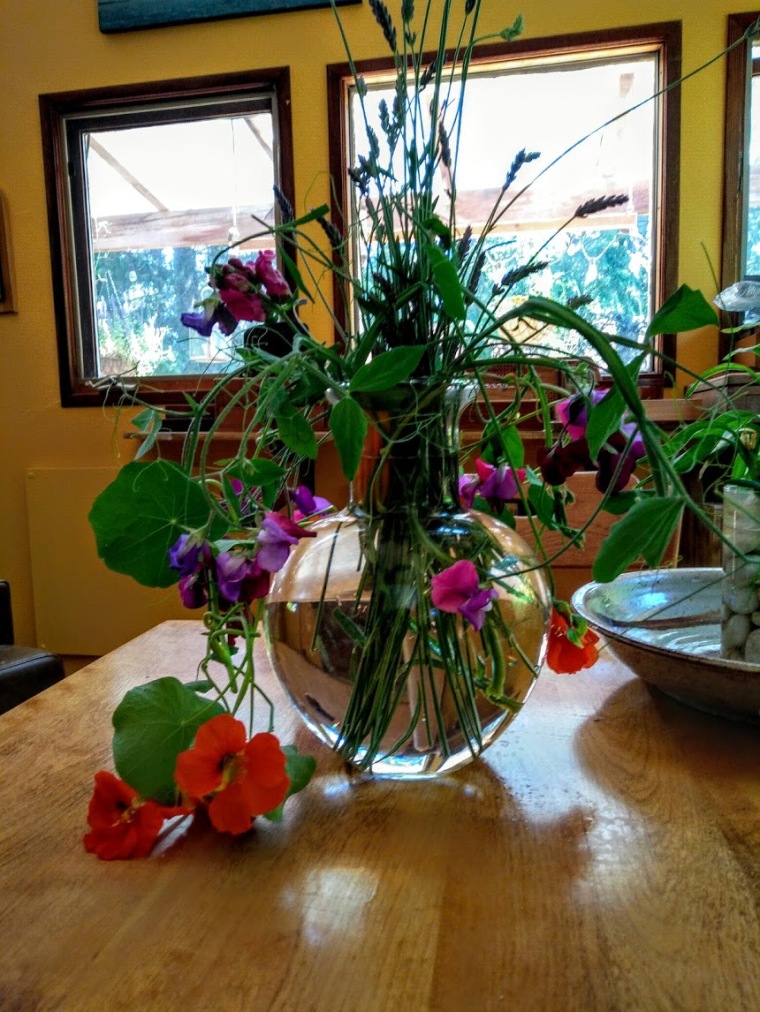 Oh, and I had another whack at the mushroom-walnut burgers and they were delicious tucked into a pita with vegan gouda sauce and a side of tater salad–yum yum!!

And the soundtrack of the day is The Magnetic Fields’ 69 Love Songs because I’ve been listening to it for two days while I garden and cook. Poor James: I know every word to every one of the sixty-nine songs (and, boy, am I belting them out!).