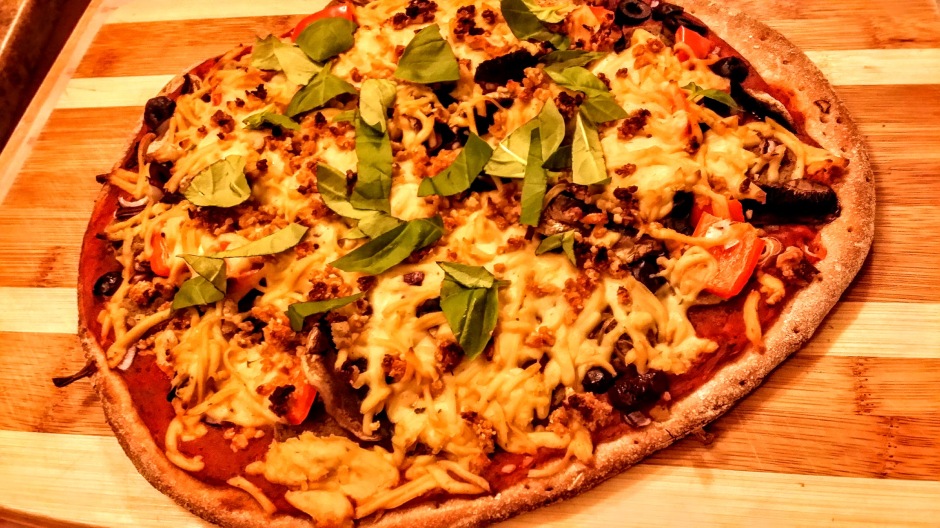 As you may have gathered, we love vegan pizza here at Sideways Cottage. As such, I’m always looking for ways to up my pizza game. My latest obsession is trying to find a crust that’s both healthy AND actually edible. The whole-wheat version is healthy, but tastes like cardboard; the white version is delicious….but not so healthy.

Anyway, I’ve been using sprouted spelt flour in my sweet potato tortillas and pancakes, so I figured I’d give it a try with my pizza crusts. Plus, Costco now carries 4 Kg. bags of the stuff at a very reasonable price!

The crusts were perfect and received the Jamie seal of approval. And, believe me, that man is fussy about his pizza crust!

Mix in a stand mixer until the dough forms a ball around the dough hook. You may need to add up a bit more flour or a bit more water to achieve ball-around-the-dough-hook perfection. Let the dough rise for an hour or so in a covered bowl.  Divide dough into two equal balls and roll out on parchment paper. Let the dough rest for five minutes after you’ve rolled it out and then roll it out a bit further.

Halfway through the baking time, turn the pizza and pull out the parchment paper, so the dough is directly on the pizza stone–THIS WILL MAKE YOUR CRUST SO DAMN CRISPY AND DELICIOUS!!!

The other new thing we tried with the pizza was vegan pepperoni and vegan sausage from The Very Good Butcher, a plant-butchery that started on our very own Denman Island, but has now moved to Victoria. We’ve been dying to try their products, and our imaginary friends–Frances and Chazz–brought us a selection of their vegan meats and cheeses when they visited last weekend.

So I loaded up each pizza…. 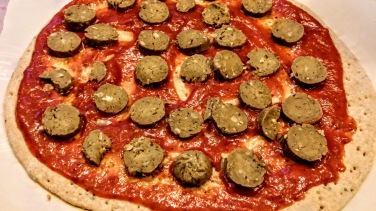 And, of course, I added olives, onions, peppers, mushrooms, and a bunch of my shreddable vegan mozzarella and a sprinkling of my chewy vegan parmesan and baked up those beautiful pies!

And, indeed, they were delicious!

Next, I’m going to try a vegan Big Mac pizza because my darling niece, Sharon, sent me pics of a vegan pizza she and her son, Dec, tried at Democracy Coffee House in Hamilton:

Good thing I have a recipe for shreddable, meltable vegan cheddar!