As I was lazing in bed this gloomy Sunday morning, I came across this picture of pizza on the Hornby Island FB page and thought, “I must have pizza!” 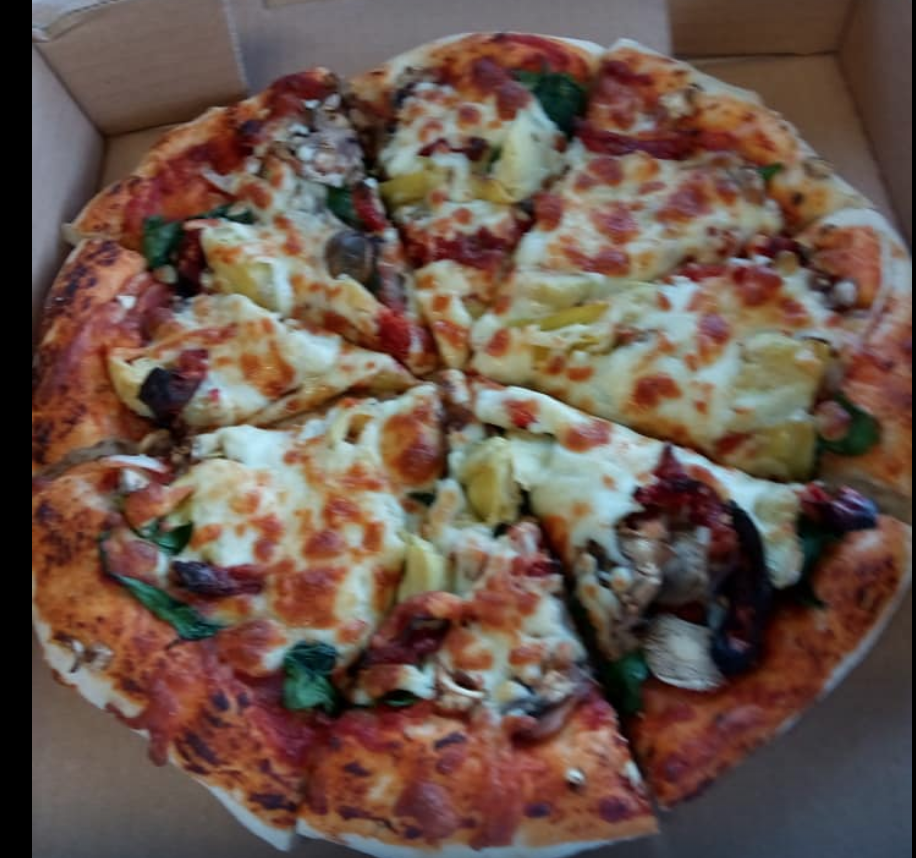 Now, clearly that pizza is neither vegan nor low in WW points, so my task for the day was to figure out a pizza recipe that would ring both those bells. The only real problem was the crust because I already had a recipe for a super low-point sauce and a very low-point vegan mozzarella.

As for the crust, I realllllly didn’t fancy one of those cauliflower crusts that you have to eat with a knife and fork because they fall apart so easily. What I ended up with is a version of my healthy low-point bread dough.

The result is very good and the recipe makes two very large pies–you’ll need a couple of cookie sheets for these pies–a pizza pan won’t do it!

So here we go!

Leave to sit until the yeast blooms.

Blend in the Vitamix until as smooooth as pancake batter:

If you don’t have a Vitamix or other high-speed blender, you’ll need to soak your lentils for several hours first. Once the mixture is smooth, add a big handful of….

Pulse a few times until the herbs are in bits, but not fully blended.

Shred one medium zucchini and microwave for one minute; squeeze as much water as possible out of the zucchini with a kitchen towel.

Mix together in a stand mixer bowl:

Pour the yeast/water mix from step one, the lentil mix from step two, and the zucchini from step three into the dry mix and blend with the dough hook for a good two or three minutes.

Cover and let rise for an hour or so.

Next divide the dough in half and roll it out.

The dough is extremely wet, so you’ll need a scraper and a sprinkling of flour. The good news is that the dough pushes out easily with your hands, however, and makes two huge crusts. Use a cookie tray or focaccia pan for each crust.

In fact, I’d recommend lining a focaccia pan with parchment paper, dusting the parchment and your hands with flour and just pushing the dough out toward the edge of the pan.

Parbake the crusts for 8 minutes at 450.

Next, load up the crusts with your sauce, vegetables, vegan bacon, and vegan cheese and bake for 15 – 20  minutes at 450. Exchange the pizza racks and turn the pizzas halfway through cooking time.

Blend it all up in the blender well in advance of pizza preparation, so the fresh herbs have a chance to meld into the sauce.

This sauce makes enough for three pizzas, so you’ll have some left over.

The sauce WILL eventually cost you if you eat 1/2 of the pizza, but only 1 point!

It’s super quick to make and will firm up to shreddable-ness in a couple of hours in the fridge!

You can top your pizza with any vegetable and herb you want and that will cost you exactly ZERO points, but you may want something a bit succulent, so I recommend a nice sprinkling of my Chewy Vegan Bacon Bits. If you sprinkle a quarter cup on each pizza, that’ll cost you only 2 points.

This lovely pie is topped with onions, red peppers, artichokes, mushrooms, and a handful of fresh basil leaves (scattered on the pie immediately after removing from the oven). My vegan cheese didn’t have long enough to set, so it didn’t shred as well as usual, but it was still delicious! 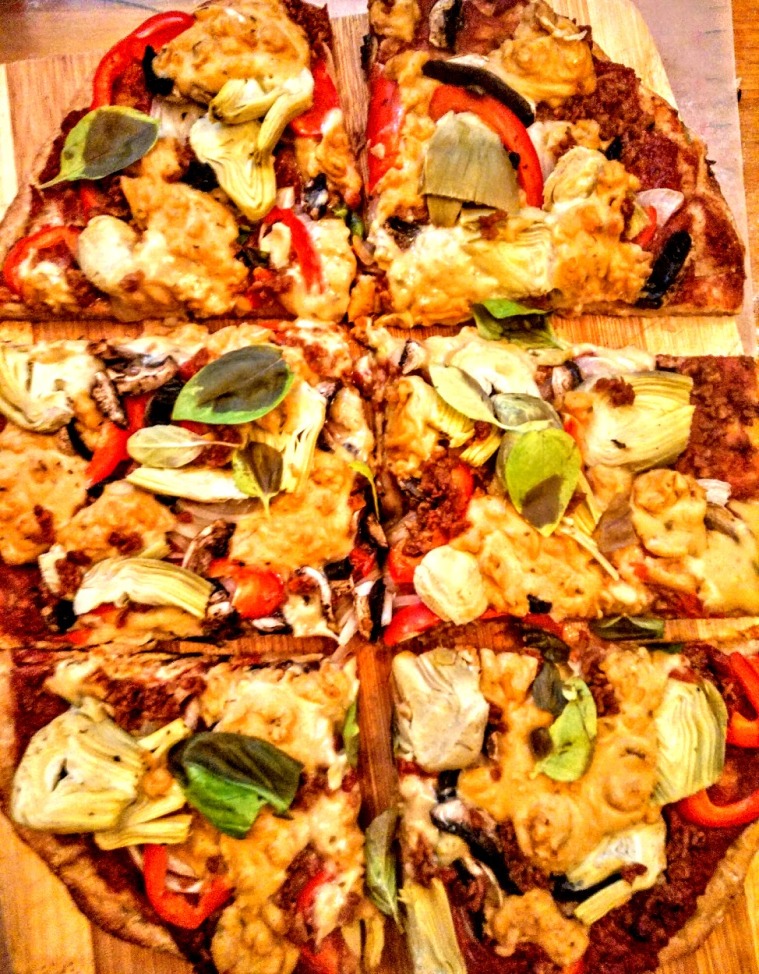 So I had two pieces of this lovely pizza for only SEVEN WW points!! I added a salad with this zero-point Caesar dressing and was more than satisfied! I’d planned a fruit salad for dessert, but was completely satisfied with my ‘za-and-salad combo!

And the song of the day is Van Morrison’s “You Don’t Know Me” from Days Like This, because the song always reminds me of my Jamie-boy and today is our 11th anniversary. Here’s a picture of us about a week before we set up housekeeping together. It was taken at my 50th birthday party at Bid and Paul’s place.

And here’s Van singing one of my favourites.