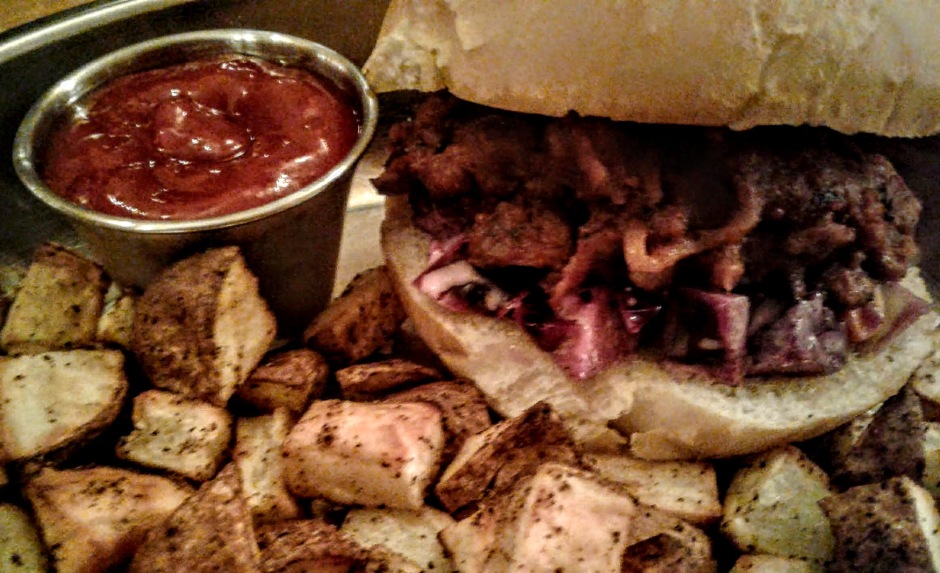 Yesterday evening, James had a hankering for a barbecue chick’n sandwich, so I whipped him up a couple of these sambos and he was so taken with them that he asked for a THIRD. Now, the man is a bit like a snake in that he has a bowl of cereal in the morning and eats nothing else until dinner, so it’s not surprising that he can put away a LOT of food in the evening, particularly since he exercises for…..drumroll please….TWO HOURS A DAY.

And that doesn’t even include things like walking the dogs to the lake (which is, more often than not, my only exercise for the day!).

In any event, this barbecue chick’n sammie is a quick, delicious meal (but, in truth, it’s quick only IF you happen to already have the chickwheat on hand, which I do!).

First, whip up some of this quick, healthy barbecue sauce. I replace the 1/4 cup of brown sugar with four medjool dates because dates are healthier than sugar. I also add a tsp of dijon.

Next, make some chickwheat (which–full disclosure–takes a few hours because of steaming time). I’ve been making a couple of loaves of chickwheat every couple of weeks, however, and freezing it in half-pound portions. Thus, I usually have some on hand.

Next, make some of this tasty coleslaw.

Okay, so next, you’ll want to slice:

Saute the onions for a few minutes:

Add the mushrooms and saute for a few more minutes:

Add the chickwheat and saute for a few more minutes:

Add 1 cup of the barbecue sauce and mix well:

Warm a few buns and load them with the coleslaw followed by a nice big helping of the chick’n mixture.

Serve with air-fried taters and more coleslaw. I’m not even a fan of barbecue sauce and I LOOOVED this meal!

The song of the day is a Kylie Minogue-Jack Savoretti duet called “Music’s Too Sad without You.” Johnny might be right: this guy does seem to specialize in heartbreak. Beautiful song though!