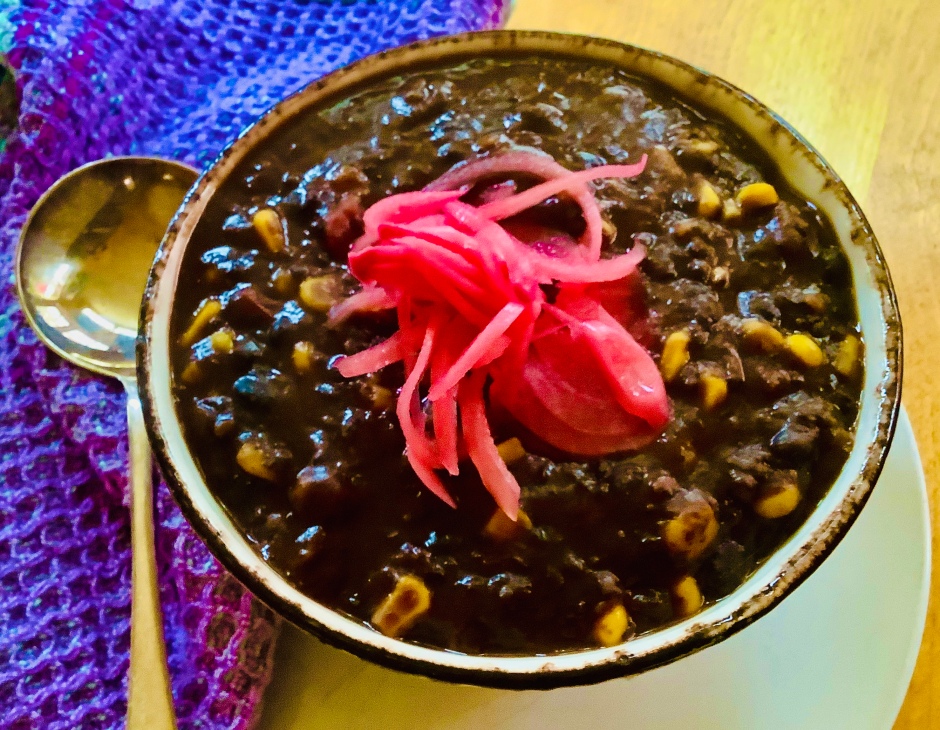 I’ve tried half a dozen vegan blue dressings, but the one I always go back to is the “Blue Cheese Drizzle” from my Plant-Based Foodie: Vancouver cookbook because it’s quick, easy, and delicious. The dressing is part of a Virtuous Pie recipe–the Stranger Wings pizza–but I usually double the recipe and use it as a salad dressing for the next few days. The one ingredient I’m not crazy about including is the vegan mayo, so I thought I’d give the dressing a try with silken tofu in its place.

The dressing is surprisingly rich and creamy!

In addition to switching out the tofu for the mayo, I also increased the tahini by 1/3 (to increase creaminess and richness), added a teaspoon of BTB Vegetable Base, and pulsed in a tablespoon of parsley at the end.

Blend until smooth and creamy:

1 tsp Better Than Bouillon Vegetable Base

…and pulse once or twice.

This recipe makes about 20 ounces of creamy blue cheez dressing at 45 calories per 1/4 cup serving.

The other thing I made today was a big pot of the best vegan black bean soup I’ve ever tasted.

It’s a Fatfreekitchen.com recipe, so I knew it would be good, and Susan Voisin knocked it out of the park once again. As I’ve mentioned a few times, I do not know why she doesn’t have a TV show and a bunch of cookbooks like others who’ve entered the vegan recipe scene much more recently.

I topped my soup with quick-pickled red onion from another great blog–frommybowl.com–created by Caitlin Shoemaker (of quick-crispy-tofu fame!).

As I write this, James is making plum chutney from a big batch of plums Bid and Paul brought over from Hornby Island on Friday–our last Friday Feast of the season.

He’s also making a batch of fennel-and-sweet-onion relish (and I think I see a pot of sugar shine fermenting away in the corner). His busy-ness in the kitchen is invariably accompanied by his singing of ancient, obscure, and/or arcane songs (known only to him….and likely Leon Redbone). Today, he was belting out a particularly dour version of “My Bonnie Lies Over the Ocean,” so I insisted on playing him The Beatles’ version of “My Bonnie” from 1962, so THAT, my friends, is our song of the day!