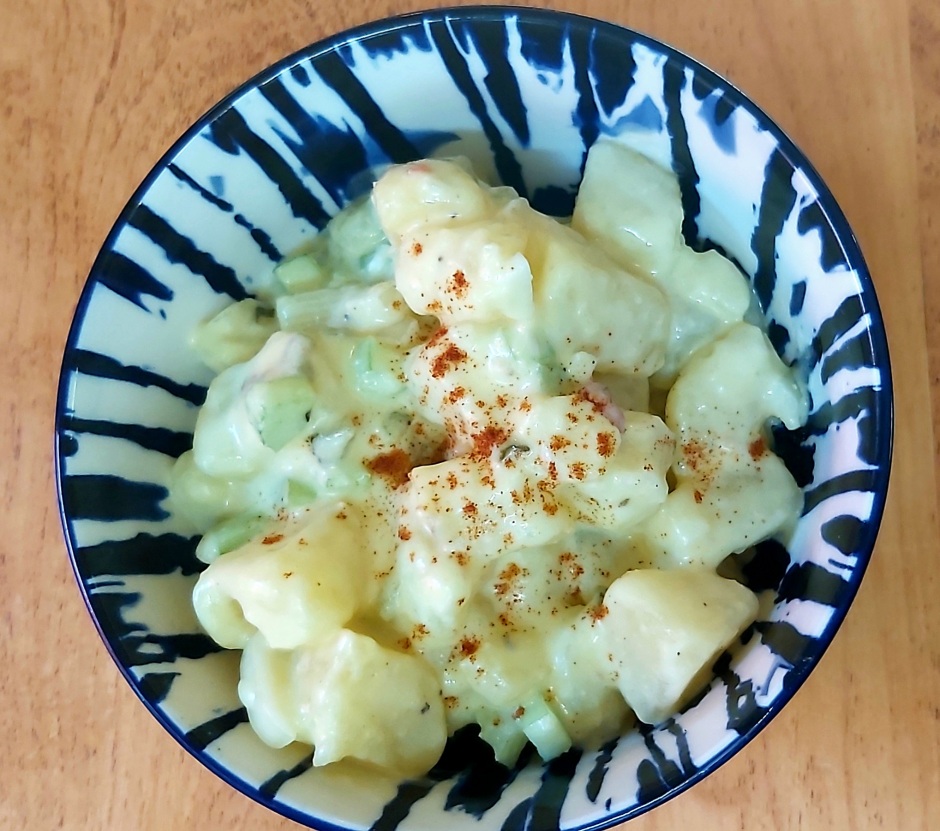 I loves me some tater salad.

Back in the day, my mum would often make it in the summer to serve alongside her silver-dollar sized hamburgers. And no, they weren’t sliders; they were just SMALL (that woman could stretch a pound of hamburger to feed a family of eight no problem!).

Her potato salad “recipe” was simply several pounds of potatoes mixed with celery, green onions, and a giant dollop of Miracle Whip. If we had guests, she might sprinkle the top with paprika.

Though her method was ridiculously simple, yet unfailingly delicious, I’m always intrigued by fancy recipes for such a basic dish. The one I came across this morning in The New York Times was not particularly extra, but the comments offered some potentially tasty tips, which I decided to incorporate into my version of the dish for this evening’s dinner.

The key to this method is marinating the cooked potatoes while still hot in pickle brine, which allows the potatoes to absorb more of the flavour. You’ll also end up not having to add as much dressing. The result is delicious!

Place potatoes in a large pot covered with salted cold water; bring to a boil and simmer until a fork goes easily in. Drain the potatoes and, while still hot, place in a bowl and cover with pickle juice.

Whisk together the vegan mayo, relish, horseradish, mustard, onion powder, salt, and pepper in a large bowl. Add the celery and onions and mix well. Remove the potatoes from the pickle juice marinade with a slotted spoon and add to the bowl. Mix well.

Refrigerate for several hours and serve topped with a sprinkle of paprika.

I couldn’t resist a little bowl for a late lunch….