I’ve actually been having some success with the deck vegetable garden this year! Part of it is certainly that we’ve had such amazing weather since the beginning of May, but we were also more strategic about a few things (for example, planting the leafy stuff at the front where it won’t get TOO much sun and bolt too early and planting the root vegetables, zucchini, and cucumbers at the back where the sun is abundant all day long). I also mixed the earth with some really rich compost (replete with red wigglers), which I think may have helped things along as well.

J also built some rather amazing planters adapted from the “vegtrug” design from Lee Valley Tools.

As a result, we’ve been eating carrots, butter lettuce, romaine, kale, and chard for weeks and the arugula (planted only a month ago) is going great guns. 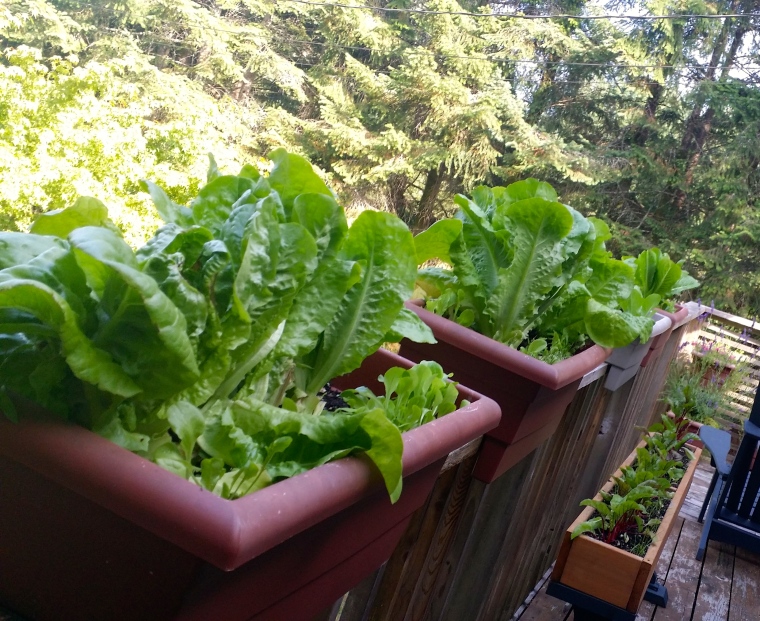 I couldn’t find kale seeds ANYWHERE in Courtenay, so I ended up buying about six kale plants. I snip a couple of big leaves every day for my smoothie and they seem to regenerate almost overnight.

After the kale had been growing for a few weeks, I noticed little tiny kale leaves growing out of the larger leaves–very freaky! After asking around and consulting Dr. Internet, I learned that this kind of “leaf-cloning” (called “epiphylla”) is distinctive to the Red Russian variety of kale. My niece conjectured that if I ate one of the leaves, I’d soon be growing miniature versions of myself from my arms and legs. 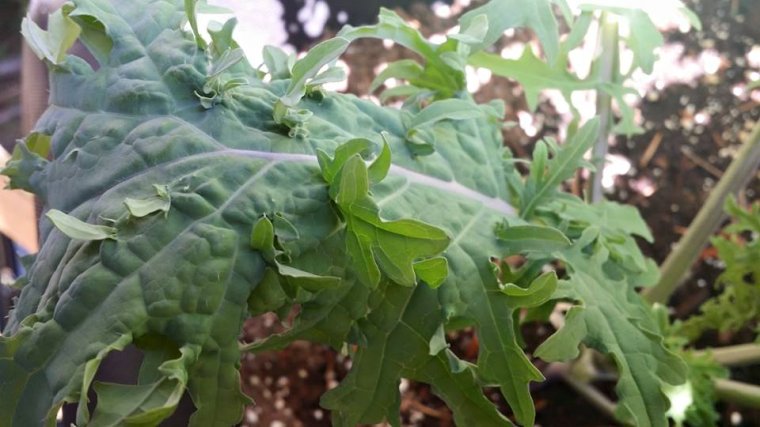 The romaine is in the foreground, but the butter lettuce looks more like romaine than any butter lettuce I’ve ever eaten. And after last year’s beet/radish fiasco, I kept meticulous records, so I KNOW I planted butter lettuce! The Swiss Chard has been producing nice fat leaves for well over a month as well, and only one plant has bolted. 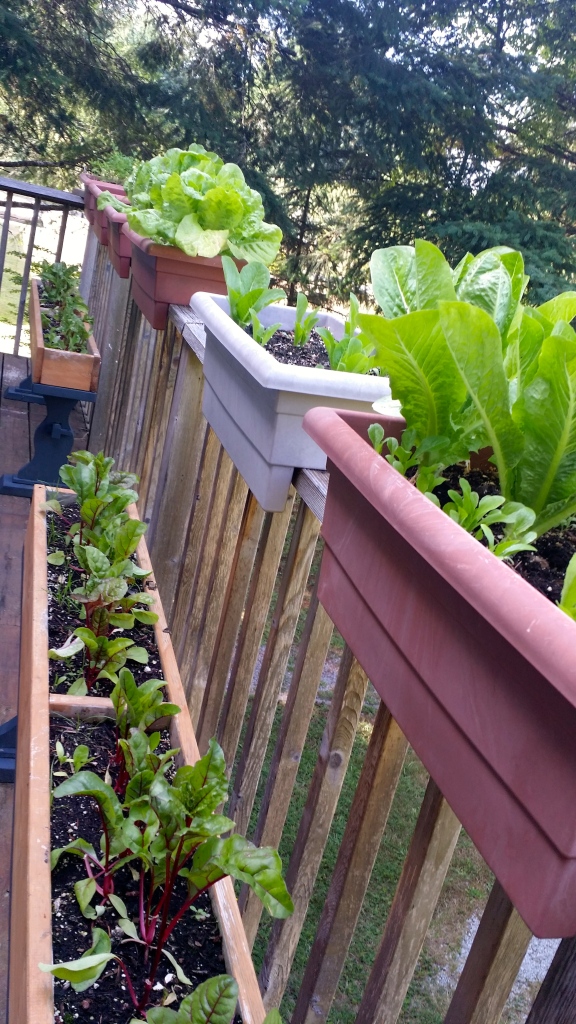 Even the cherry tomato plant is producing fruit (and I’ve kept to my principle of benign neglect with the tomatoes because they’ve disappointed me every damn year). I swear that if they disappoint me this year, I’ll send them a nasty e-mail of the “I’m bitterly, bitterly disappointed” variety.

I took this picture of the arugula and zucchini on Tuesday….

..and two days later, they seem to have grown tremendously! 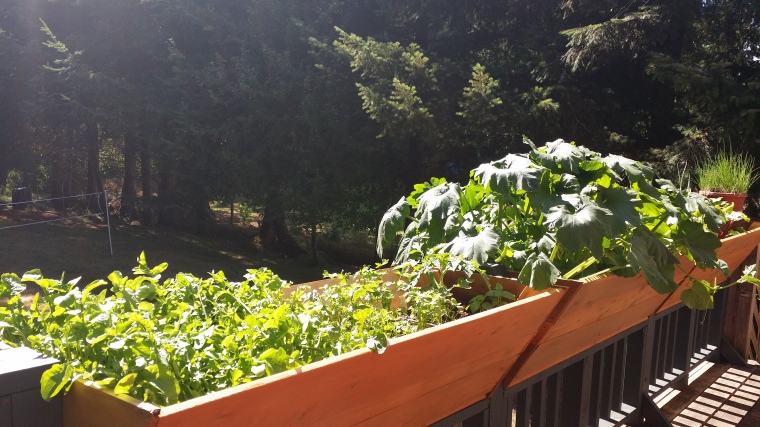 The beets are still thready and I’ve yet to see any flowers on the cucumbers, but the zucchini now has two big yellow flowers, and we still have another (almost) eight weeks on the island to enjoy the harvest! 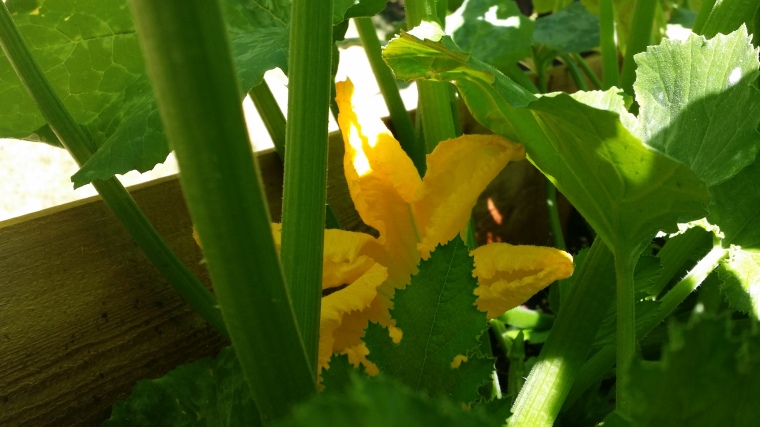 My herbs are also coming along well. I have a few basil and parsley plants at the front (started from plants), and some basil and cilantro started from seed at the back. The basil were from seed mats, which I haven’t had much luck with in the past. I soaked them very well this year, however, and that seems to have done the trick because they’re growing very nicely…

…as is the cilantro (though I’m a bit worried it will bolt). As I mentioned above, I also mixed quite a bit of really rich compost into everything, which might be helping things along. The one strange thing about this is that a number of (what look like) small tomato and cucumber plants have sprung up from the compost. I pulled most of them out, but I kept this one tomato plant (on the right side of the picture) to see what would happen. I also transplanted a couple of (what I think are) cucumber plants that sprang up randomly, so we’ll see what happens with those. 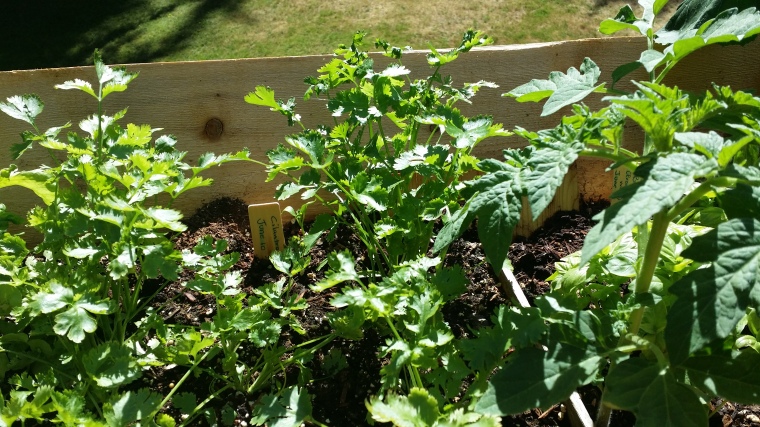 We’ve also been trying this “kitchen scrap” experiment where you plant the root end of celery, leeks, and green onions and the plant regrows. It’s been a success with the green onions (which I planted at the same time as the green onion seeds on the right):

The celery has taken hold, but it’s rather slow in its growth…

And we’ve been enjoying the carrots for quite some time now because I planted a bunch of them on the Easter weekend (because they were the only seeds I happened to have at that point, and I wanted to see how well they would grow on the back deck). What I can’t figure out is that one planter would produce a lovely batch of carrots and the one right next to it would contain only the threadiest little things. Not sure what the issue is. Anyway…they are lovely when they’re just barely cooked with a bit of salt and pepper…

And though it rained a bit last weekend, the island is so dry that there’s a total fire ban (even chainsaw use is banned!). As a result the frogs have been camping out in the deck planters (likely the only damp place around!) even more than usual this year. 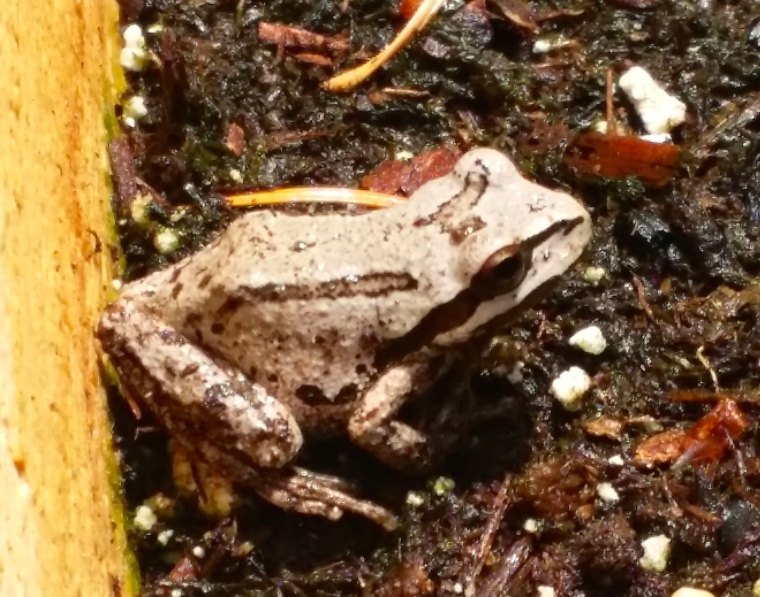 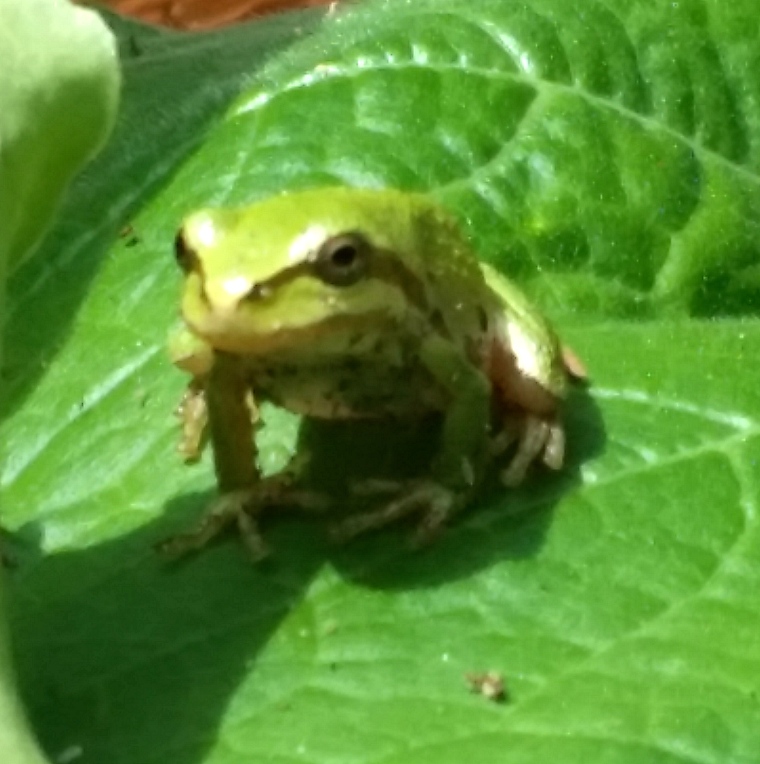 These cute little guys (called “Pacific Chorus Frogs”) are smaller than a quarter and green or brown in colour. I think they change colour because I once saw one sitting half under a planter and half in the sun and he was brown on the shady end and green on the sunny end.

And here is a (very fuzzy) picture of our little bee buddy, Burt, who arrives each day when the sun is over the yardarm as J and I are enjoying our evening drinks on the deck. Each evening, the industrious and methodical Bert and the more haphazard Ernie (whom I’ve diagnosed with ADD) arrive to engage in their own pre-prandial drink of nectar from the lavender plants. We were alarmed one day when a third bee arrived since it broke our little fantasy that we were actually seeing the same two bees every day.