I’m currently obsessed with arugula, which is growing brilliantly and abundantly in my little deck garden. Now I have grown it in the past, but only in a “salad mixture,” so I didn’t really notice it in a sea of much flashier greens (except for the occasional “hmmmm…what was that?” when I noticed a slight peppery taste in my salads).

After reading that it’s a “fast grower,” however, I decided to pick up a few packets of arugula seeds and plant them at the back in a particularly sunny corner of the deck. This unassuming little green grew like the dickens and, within just a couple of weeks, I was throwing handfuls of arugula into everything–from salads to smoothies.

And I’ve planted a couple of beds of second wave arugula that should be ready just as the first wave is bolting (which it invariably will, since it’s planted in a spot that really is too sunny for leafy greens).

The best thing about a big bed of arugula is that it smells amazing–a kind of a nutty, slightly peppery smell. I’ve never grown a leafy green with such a profound (and addictive) scent. Indeed, I’m quite sure I drove my sister-in-law (who was recently visiting from Ontario) crazy with my frequent exclamations over how pleased I am with my arugula.

Yes, my arugula is most definitely my favourite child (though, frankly, I’m so pleased with all my vegetables this year that I’ve yet to send any to their room without dinner). Arugula is also a bit of a sturdy green, like spinach or Swiss chard, but not quite as sturdy as kale, so I’ve been dying to use it in something hot. I’m planning to toss a big handful on pizza when we have guests tomorrow evening, and I may try wilting it with chard and kale, but I wanted to try something hot with arugula as the central flavour. I came across this recipe in the NYPost and decided to adapt it to a vegan version. My adapted version is half the original because I think it will be best when freshly made. It serves two for dinner (and probably four for a starter). 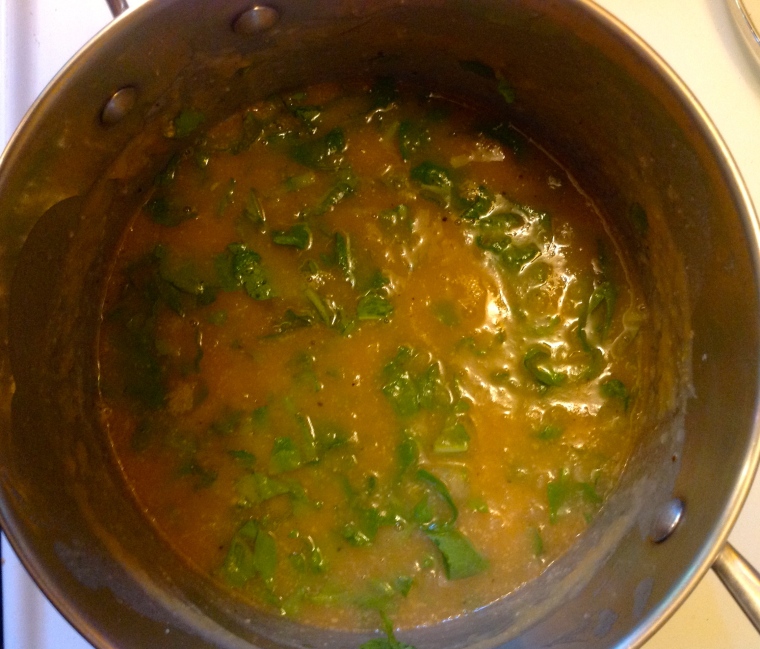 Finally, serve with a big hunk of Annie’s beer bread!

And here’s our lovely dinner. The lavender smells beautiful and is dried (because that particular plant seems to have died in the pot!) and in a vintage Waterford vase that Em’s lovely Irish friend, Kate, brought from her hometown in Ireland. 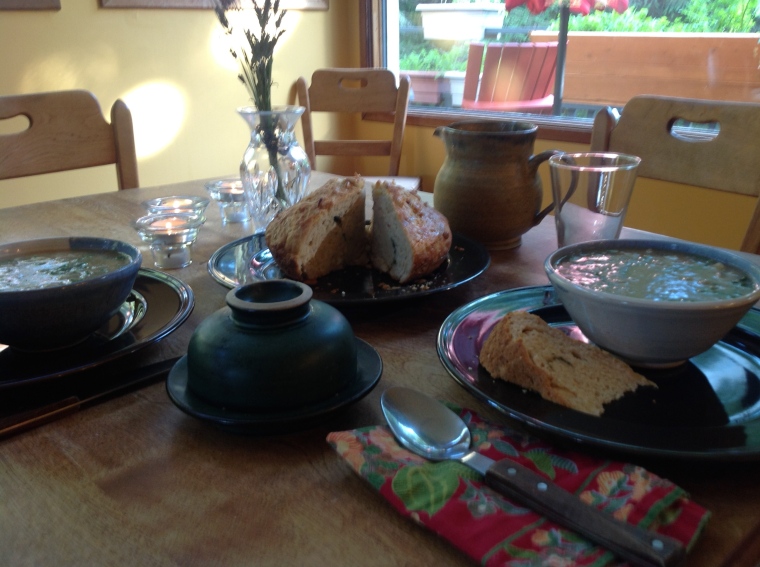 And, in celebration of my submitting the last draft of my dissertation proposal, we’ve been listening to Magnetic Fields’ 69 Love Songs all afternoon!