Back when I first discovered PB2 at Donald’s Market, I was so excited, I bought three jars of it and began experimenting with it in earnest. After a week or so, however, I forgot all about it! Em’s visit prompted me to make a batch of her favourite peanut sauce, and I remembered about the PB2, so I thought I’d try to make the recipe a bit more umami-ish by adding miso, nutritional yeast, and BTB paste. I also refined the process (i.e., why not just add the corn starch with everything else? It’ll thicken just the same!!).

1. Throw all the ingredients  in the Magic Bullet for thirty seconds, then pour into a small saucepan. Bring it to a boil and whisk for about five minutes. Once the sauce has reduced enough to thicken, remove from heat. 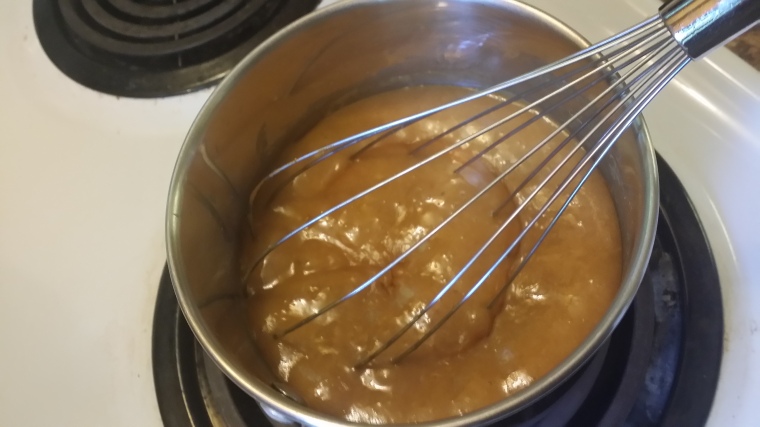 I used it to top a mix of brown rice noodles and beet and carrot voodles (what James calls my Spiralizer noodles). It was very good, BUUUUUT for the past few months, I’ve noticed that if something is highly processed (as the PB2 is) it tastes weird to me now. This happened a few years ago when I started making my own salad dressings and soups: within a very short period of time, processed salad dressings and soups tasted awful to me.  So now it seems that most processed stuff tastes icky to me (though my beloved Field Roast Apple Sage vegan sausages still taste UH-mazing. Can’t say the same about their other two flavours though 😦 .

And here you can see the voodles mixed in with the noodles:

James’s response was, “This is really good, but, I’m sorry, I’m never going to be a fan of peanut sauce.” ACK! It’s my favourite thing to eat!!!