We’ve had a busy few months up here at the cabin with lots and lots guests–some for an afternoon, some for a few days. As a result, I’ve been making bread like a maniac and trying all kinds of different toppings.

Our latest batch of visitors included my niece (and fellow food fanatic), Annie, and two of her lovely girlfriends–Kitty and Jamie. Em has been up at the cabin for a month, so it was nice that the cousins were able to visit. And Annie’s friends are also foodies, so we spent a fantastic few days eating and chatting about food. Indeed, Em remarked that James and I must be delighted to cook for them all because they were SUCH an appreciative audience for our food offerings (and they really were–Annie has always been THE most satisfying person to cook for, and her friends are exactly the same). 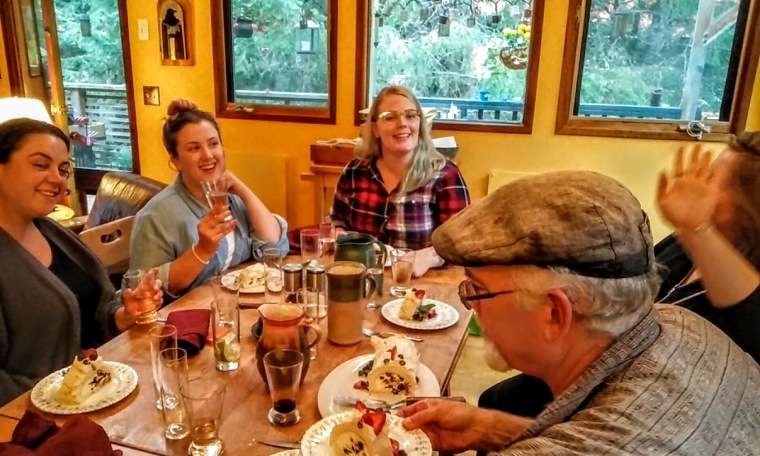 In between skinny dipping across Graham Lake, the girls spent hours poring over our vegan cookbooks and taking pictures of everything they were going to make when they arrived home.

She recommended the herb mixture to me months ago, but it’s always sold out at Edible Island in Courtenay, so I was delighted to receive it. She texted me this morning that she’d been trying the famous no-knead bread and had topped her first baguette with the sprinkles, but indicated that she’d try to incorporate it into the loaf in future.

I was preparing a couple of loaves myself when I received the message, so I tried kneading the herb mixture into the baguette myself.

I also topped the loaf with chopped onions and garlic. It smelled UH-mazing as it was baking and turned out to be ABSOLUTELY delicious (unanimously declared so by me, James, Em, Buster, and Stella)!

The sliced bread reveals that the herbs are in little channels, rather than homogeneous, but the only way to avoid that would be to mix the herbs into ALL of the no-knead dough (and, frankly, the channels of flavour are absolutely fine anyway):

James mentioned that the mixture would make fantastic burger buns, so that will be my next experiment.

And here’s Stella waiting impatiently for a taste of the bread….

And on this first day of September (my first OFFICIAL day of retirement), it seems that fall has arrived on Denman Island. The rain is relentless and thunder’s been cracking every so often, but I’m cozily tucked up in front of the wood stove with a cup of tea and a puppy on either side of me, so all is well…