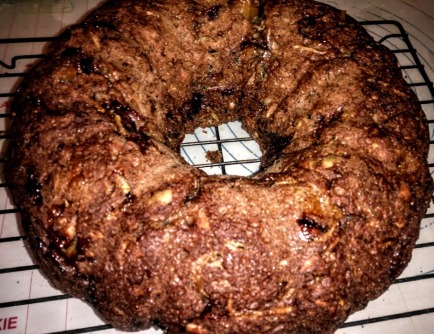 Okay, I’m fully aware of how precious the title of this post is, but bear with me, this banana-plum-zucchini bread is the serious bomb.

Wellll, twenty odd years ago when I was living in the Brewery District in Kitsilano, I stumbled across a new condominium building where the developers were selling off the various items in the demonstration suite. Most of the big items were spoken for by the time I arrived, but there was a large painting of a bowl of fruit that seemed perfect for a long empty wall in the hallway of our condo. The painting was, to my mind at that time, merely inoffensive and vaguely decorative. I assumed it was a detail from a larger painting by one of the Old Masters until one day an art historian from the college came over for lunch and said, “Ah, I see you’re looking at a Caravaggio.” The turn of phrase seemed odd, particularly because I never actually looked at it. I mostly just passed it in the hallway.

Ten years later, we were living on the water in the River District and hung it in the dining room, at which point I began to grow attached to the painting since I was frequently looking at it as we ate dinner. I learned from Dr. Internet that the painting was indeed a print of a Caravaggio and was not in fact a detail of a larger painting, but a complete composition.

I realized, of course, that a large part of the reason for my growing affection for the painting (called simply “Basket of Fruit”) was related to my age: I had just turned fifty and the painting’s focus on overly ripe fruit on the verge of decay seemed entirely appropriate.

Jeez, I’d taught enough poetry on the fleeting nature of youth and beauty to be very familiar with the theme! Yeah, I’m lookin’ at you, Robert Nothing-Gold-Can-Stay Frost!

What bothered me, however, was the precarious situation of the wicker basket.

The painting now hangs in our little loft on the Quay in New West, and, as I approach sixty years old, the wicker basket, teetering as it is on the edge of the table, no longer bothers me because I finally realized that the painting is not only about the transience of youth and beauty…but of life itself.

And having just retired AND just turned fifty-nine (a year away from sixty!!!), it seems entirely appropriate to be cognizant of this essential truth. As my brother, Johnny, always says, “What’s valuable to us now is time, not money” (though I’m ten years younger than he is, so I’ll still hang on avariciously to the value of money for a few years yet!).

Anyway, back to Caravaggio’s ripe fruit: this morning, our next-door neighbour, Sybil, brought over an enormous bag of very ripe plums, and as I poured them into a couple of bowls, I immediately realized that if we don’t eat these succulent ripe beauties in the next few days, they will be heading for Caravaggio territory… 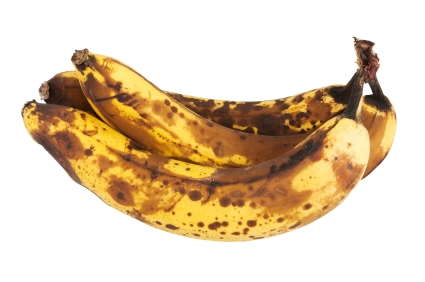 And so I give you the (all vegan, all healthy, and almost entirely original)…

Preheat oven to 350 F. Use a silicone no-stick or spray a pan with cooking spray. This recipe makes 12 huge muffins, 2 loaves, or one large bundt. Your cooking time will vary based on which type of pan you use.

Pit and chop the plums and cover with 1.5 TBS flour. Set aside.

In a mixing bowl, mash the bananas . Add the applesauce, soy yogurt, maple syrup, and vanilla and mix well. Mix in the grated zucchini.

Sift in 2 cups of the flour, the cinnamon, allspice, baking soda and salt. Mix to combine. Add the nuts, seeds, and plums, and final cup of flour, and mix just until no visible flour is left.

Transfer batter to the prepared pan and bake for 60-70 minutes.

Test for done-ness with a toothpick or knife.

Ideally, use an internal thermometre to ensure the loaf has achieved a temperature of 214-215 degrees.

The bread turned out beautifully….

And it tastes fantastic. The little pockets of plum are amazing! And it’s super healthy! In fact, the only ingredient that’s not “nutrition intense” is maple syrup.

Oh, and don’t worry, James dropped off a couple of my fresh baguettes to Sybil to repay her generous plummy bounty!

One thought on “Caravaggio Plum Loaf”