I often wake up in the early hours of the morning and rather than lie awake fretting about some highly unlikely eventuality, I open my MacBook and browse Netflix until I find something that appears to be the perfect balance of interesting and boring.

The selection must be interesting enough to distract me from absurdly catastrophic thoughts, yet boring enough to allow me to drift back to sleep. Forensic Files is my usual go-to, but the episodes play one after another (long after I’ve gone back to sleep), so I sometimes fear I’ve incorporated far too much murder into my slumbering psyche for my own good. In fact, I’ve noticed that I’ve recently been peppering everyday conversations with terms like “epithelial cells” and “mitochondrial DNA,” so it’s likely for the best that I’ve started to seek out more benign fodder for my night time consumption.

When I awoke at 4:30 this morning and opened my laptop, I stumbled across a movie that appeared to meet my requirements–Len & Company–and was asleep before the opening credits were over. I awoke to the last few moments of the film, in which Len, a former punk musician and present-day successful music producer sings The Clash’s “Stay Free” in a rather sweet impromptu moment with his Britney-Spears-ish protégé.

The song is so melodic and so surprisingly sweet (thematically speaking) that I’ve been listening to acoustic versions of it all day. I was struck particularly by the final line–some advice from Mick Jones of The Clash to his childhood friend who’d just served three years in Brixton prison:

The advice is to his friend who has an apparent tendency to go hard, to step heavily, and to become imprisoned, but it’s a mantra reminiscent of Taoism, a philosophy which emphasizes a harmonious relationship between nature, humanity, and the universe, and suggests that liberation (from the suffering of everyday life) is accessible through living in harmony with the Tao–or way–of the universe of which we are all part.

Now, I know that’s a pretty lame explanation of Taoist philosophy, but “the tao that can be told is not the eternal Tao,” so it’s a losing proposition to even try.

I will say, however, that when I first read Stephen Mitchell’s translation of The Tao te Ching thirty years ago, I was fresh out of grad school and the philosophy of “action through inaction” was a revelation to me–likely because grad school often seems like relentlessly bashing one’s head against the wall, a practice Taoism would advise against.

In any event, today I decided to work a bit on my seedling beds and, as I listened to various versions of “Stay Free” throughout the day, I became determined to take a Taoist approach to my garden this year, particularly the principle of “effortless effort”–or, ahem, not relentlessly bashing one’s head against the wall. I will “go easy” and “step lightly.”

In other words, I am determined to do what Carol Deppe (The Tao of Vegetable Gardening) suggests:

Do that which gives maximum effect for the minimum effort, so that unnecessary action has been eliminated. It is about balance: not watering too much, not fertilizing too much. [It is about] creating a relationship with the garden, knowing what needs tending what needs to be left alone.

Now 2017 has been an uncharacteristically cold year, but I was determined to start everything from seed, so I bought a Floralight from Lee Valley Tools and on March 20th planted some kale, which I’m hoping to get into the veg trugs by the middle of next week.

I also started some sweet pea flowers and nasturtiums because I also want to grow my flowers from seed this year.

Unfortunately, the Denman General Store had only those two types of flowers, so that’s what I started. The sweet peas sprouts are brilliant–they sprouted within a couple of days and almost every seed took, but the nasturtiums took much longer to sprout, and when they did, produced only TEN out of thirty-six potential plants!! And they were from West Coast Seeds, which is supposed to be a good seed company, so I’m rather surprised!

Look at all those empty cells! Meanwhile, my sweet peas are glorious!

The reason I’m waiting until next week to transplant my kale is that Dr. Internet says that seedlings should have four genuine leaves (as opposed to the two weird little leaves that first emerge) and two more genuine leaves starting before transplanting….and we’re not quite there yet. 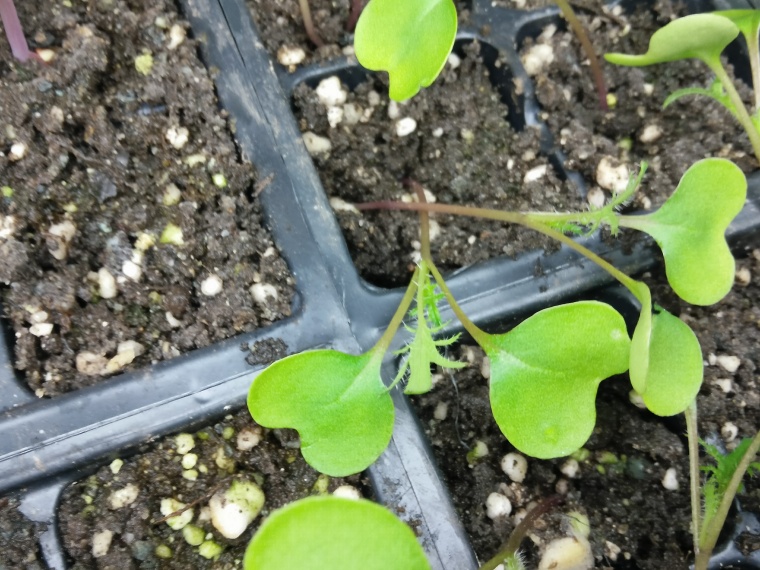 We managed to get into Courtenay last week, so I picked up more flower seeds: zinnias, snap dragons, and marigolds, which I grew from seed last year–they were gorgeous, and SO easy to care for. I planted those in little cells yesterday (March 31st).

I also planted some chard and a few sweet one million tomatoes. I’ve never planted tomatoes from seed before, so I was startled to realize how few seeds were in the package…and how small the actual seeds were. And as I poured the precious little items into my little seeding trowel, I had a moment reminiscent of Alvy Singer sneezing into a box of cocaine in Annie Hall: I knocked my hand and the contents of my seed trowel spilled into the box of earth. Of course, it was impossible to figure out which little white things were the tomato seeds and which were bits of perlite in the soil. I eventually managed to find twelve of the potential twenty-five precious seeds, but who knows, I could have planted perlite.

Now the seedlings are all crammed together under the floralights at this point–each trying to get its share of the T5 light spectrum! 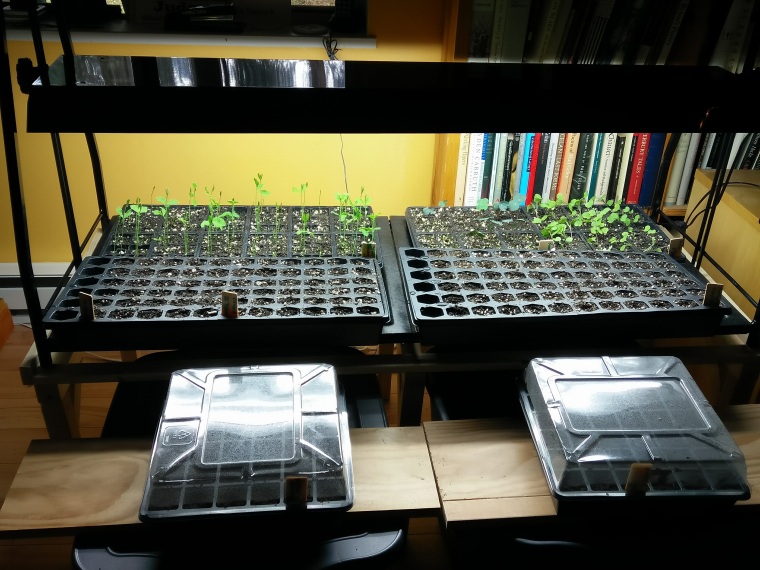 The two seed starters in the foreground are an experiment: each cell comes with a little dried pod of seed nutrition. You just pour in warm water and watch them expand–it was quite neat! 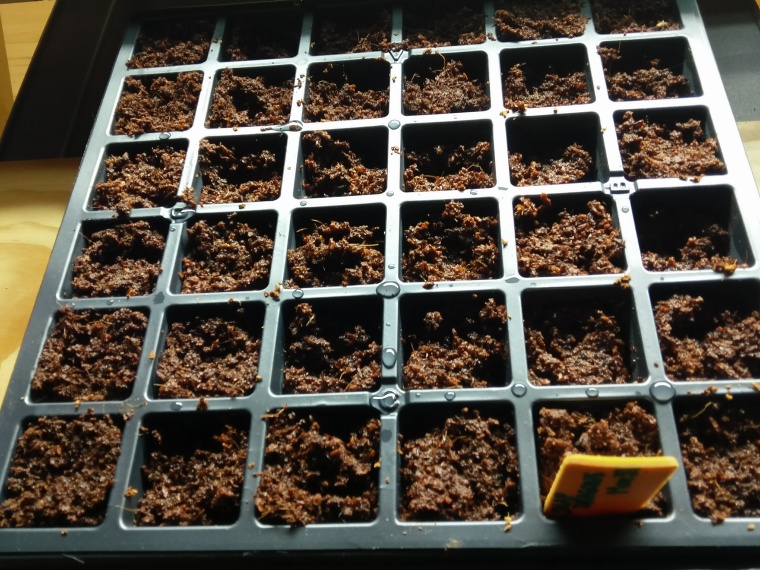 I also picked up a couple of big heather plants (because they were 50% off!!) and a few marigold plants because they were also very reasonable. I’ll start figuring out my flower boxes next–I have a few plants that are perennials, so I’ll clip those back and then prepare the other boxes with fresh soil.

I also bought this cool mini greenhouse that I can use to harden off my little seedlings before planting them.

So that’s where I am with my 2017 garden at this point. I expected to be further along by April 1st, but the weather has dictated otherwise, and the Taoist gardener goes with the flow of the Tao: Go easy, step lightly….stay free!

And as we were eating dinner this evening (Mushroom Strogonoff, Vegan Caesar Salad, and freshly baked baguettes–YUM YUM!), I was telling James the focus of my blog post when he suddenly asked, “And will there be NO charming Jamie story to include?!!”….which became my charming Jamie story (very meta, I know!).

And, of course, the song of the day is an acoustic cover of The Clash’s “Stay Free”…

And because I’m on a bit of a Mick Jones jag at the moment, here’s another of his songs from when he was with Big Audio Dynamite. From the most excellent album, The Globe, here’s the song “Rush”…