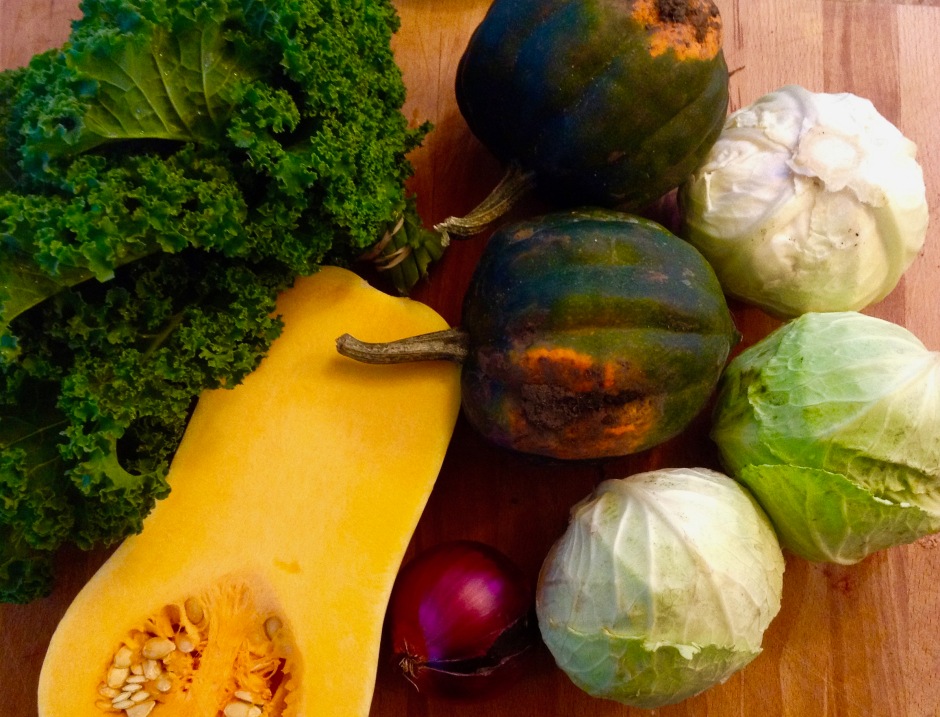 About a year and a half ago, my niece, Annie, mentioned that she was getting into fermentation and suggested I look into its health benefits. Now, I had NO interest whatsoever in fermentation, but Annie’s enthusiasm for anything is always incredibly infectious, so I consulted the good Dr. Internet and promptly decided that any attempts at fermentation on my part would result in some kind of botulism poisoning.

But then, last Christmas, my darling Em gave me Sandor Katz’s The Art of Fermentation and I’ve been studying the intricacies of this “art” ever since.

Next, I started coming across article after article about the human microbiome, how important its balance is to health, and how important fermented foods are to maintaining that balance. And, indeed, according to Dr. Jeffrey Gordon (a genomics specialist at Washington University School of Medicine) in The New York Times, “The nutritional value of food is influenced in part by the microbial community that encounters that food.”

Finally, I was at the farmers’ market on Saturday and came across the loveliest little organic cabbages grown right here on Denman Island.

It seemed the perfect storm beckoning me toward fermentation, so I finally took the plunge and started a batch of sauerkraut!

I chopped up what amounted to two pounds of cabbage… 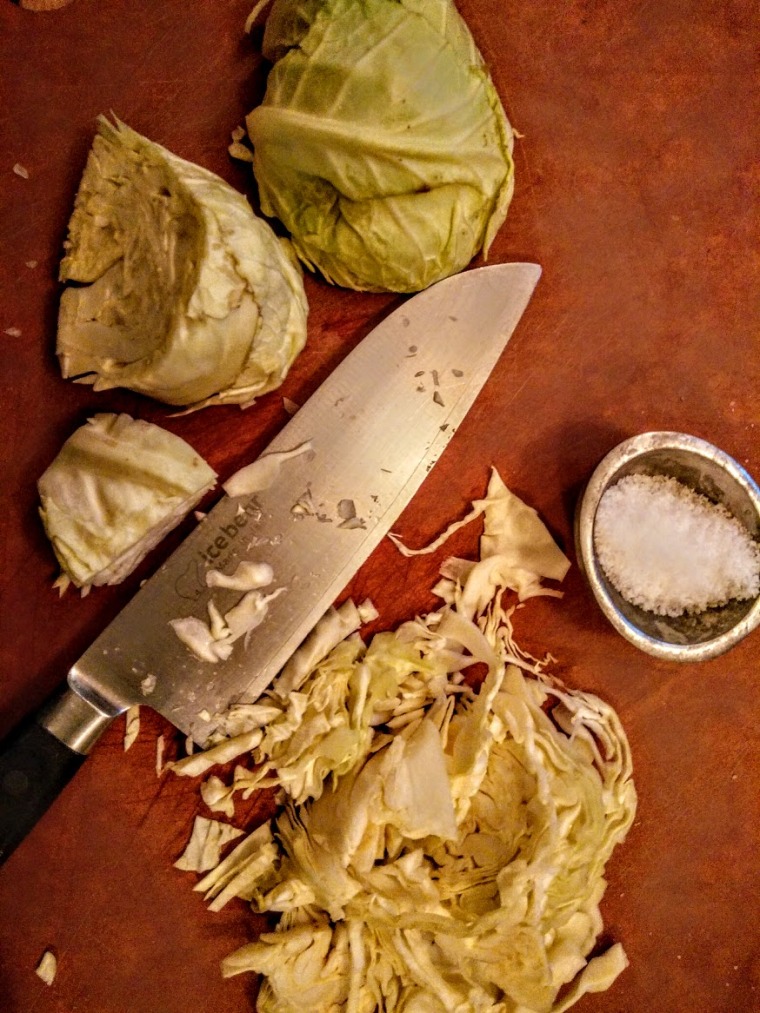 And grated one-quarter pound of carrots…. 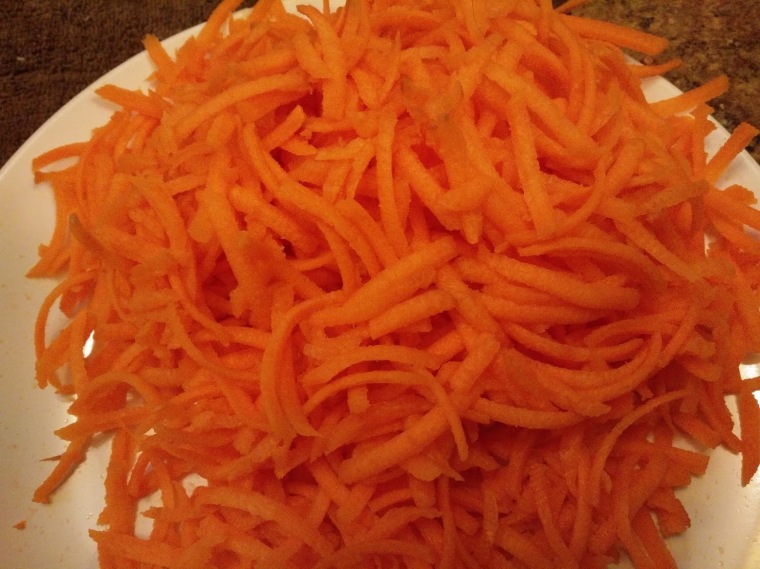 I added one TBS and one tsp of sea salt (based on a calculation I found on a website). If you add too much salt, it can inhibit fermentation, so you have to be conservative. You can’t use table salt because it contains iodine (which, again, can inhibit the fermentation process). 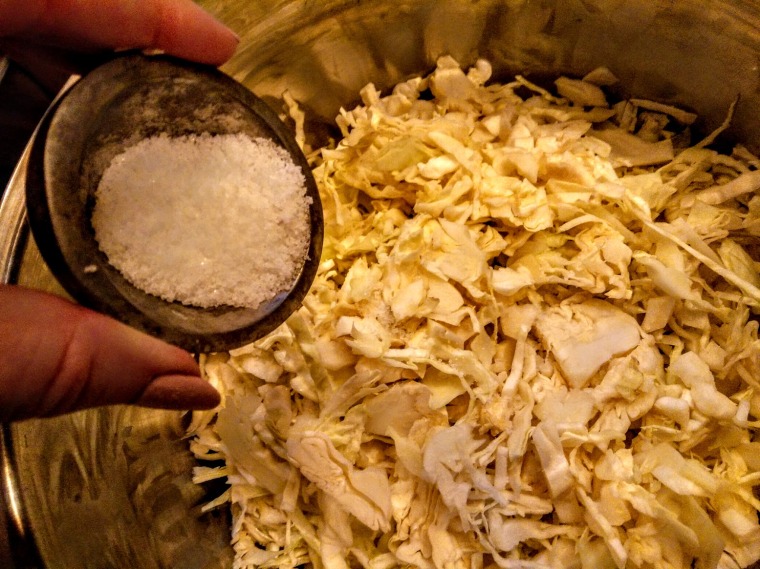 Next, I squeezed and massaged the hell out of the cabbage for ten minutes. There seemed to be little deviation regarding the recommendation of ten minutes. Indeed, every resource recommended the same time, so I lined up an interview with Dr. Douglas Lisle and had at it for a solid ten. 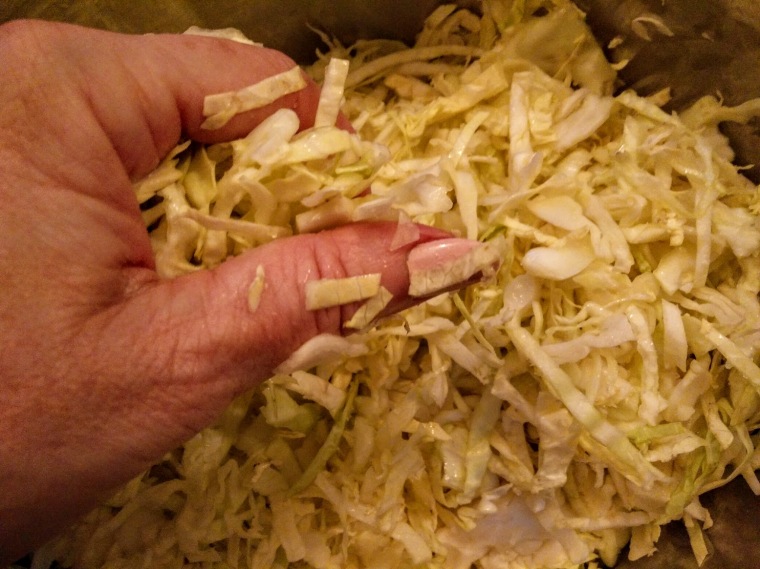 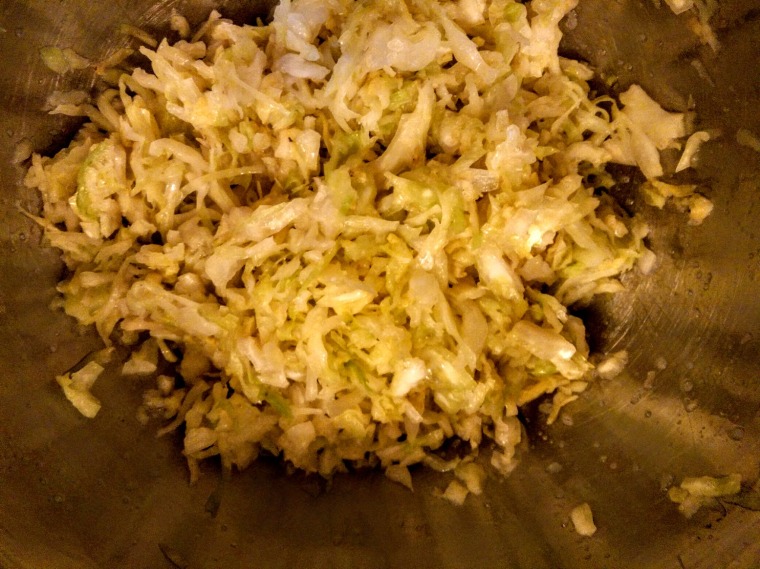 And when I squeezed it, quite a bit of water released: 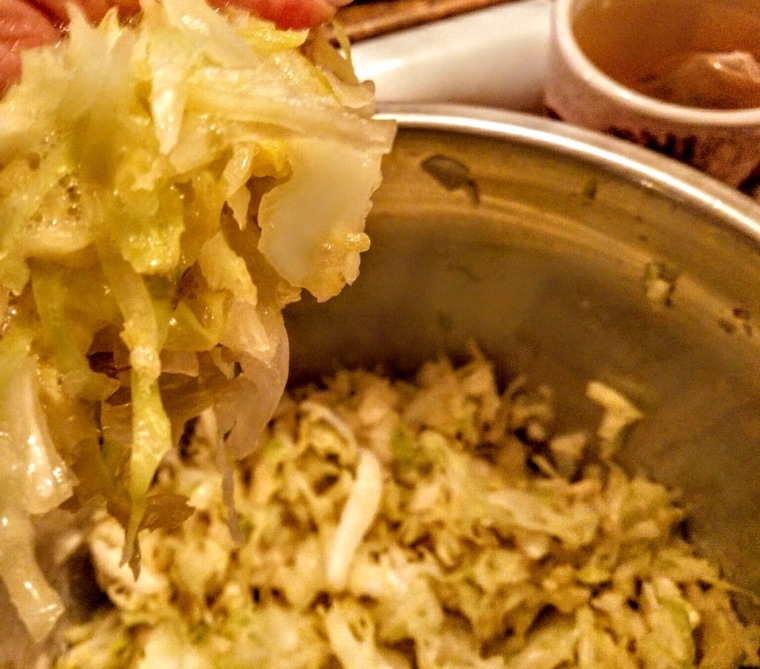 Next, I mixed in the shredded carrot: 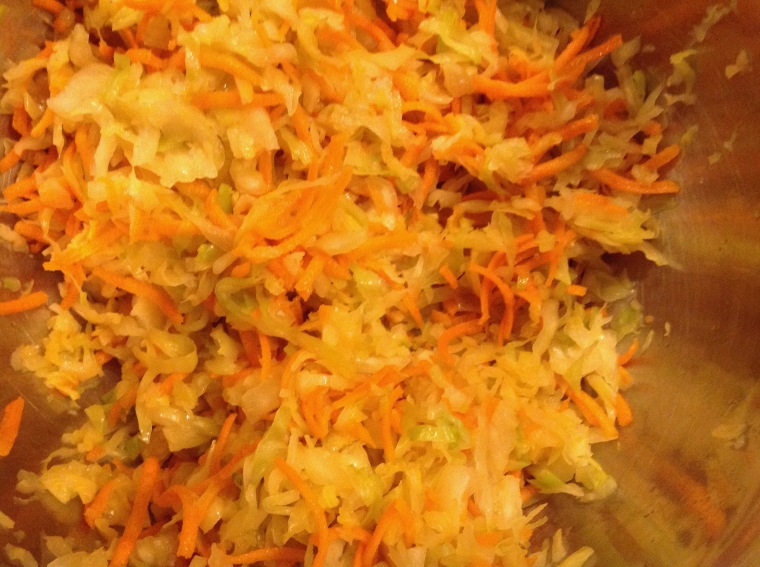 And packed it all into a large mason jar. 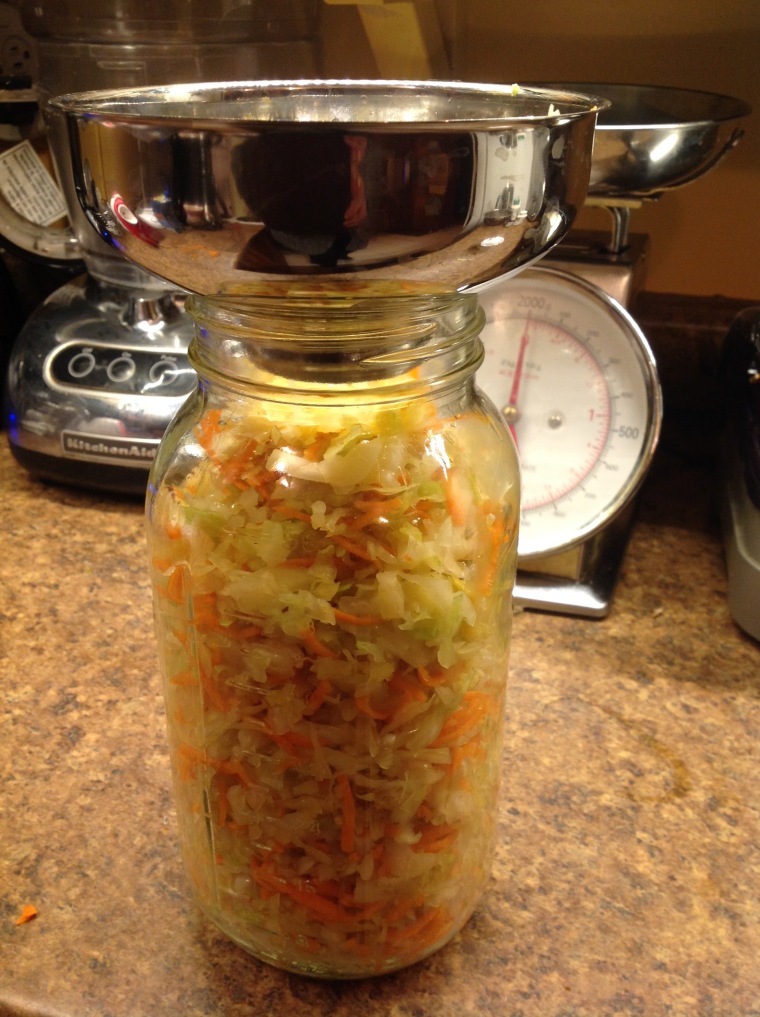 Next, I packed it down with my fist. The idea is that there should be enough liquid produced by the massaged cabbage to cover the shreds, but it wasn’t high enough, so I added some water. I wanted to use our tap water because it’s from Graham Lake and is lovely water. However, Graham Lake water is lightly treated, so I left a big mug of it to sit for several days until the treatment chemicals evaporated. I poured a bit of the water into the jar, and then topped it with a glass fermenting stone (called a “pickle pebble”), the purpose of which is to keep the cabbage submerged. Apparently, if the cabbage shreds rise above the water line, the cabbage will rot (or something bad, which I can’t quite remember). 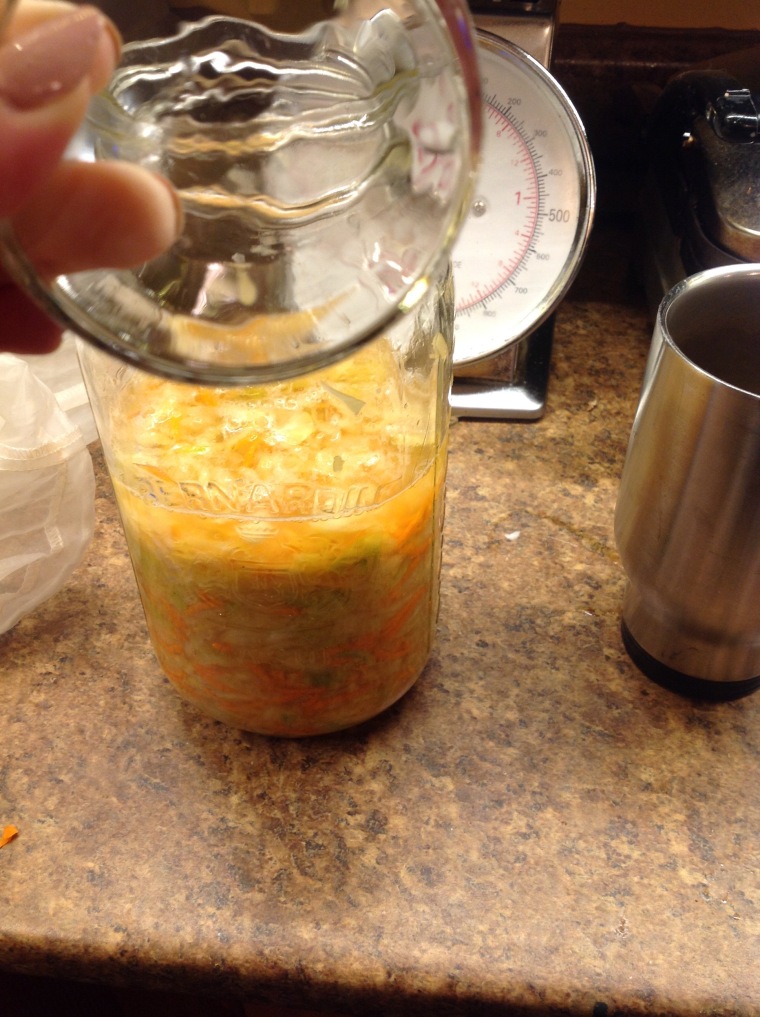 Next, I closed it up with a “pickle pipe” mason jar top, which allows the carbon dioxide to escape without allowing oxygen into the fermentation. 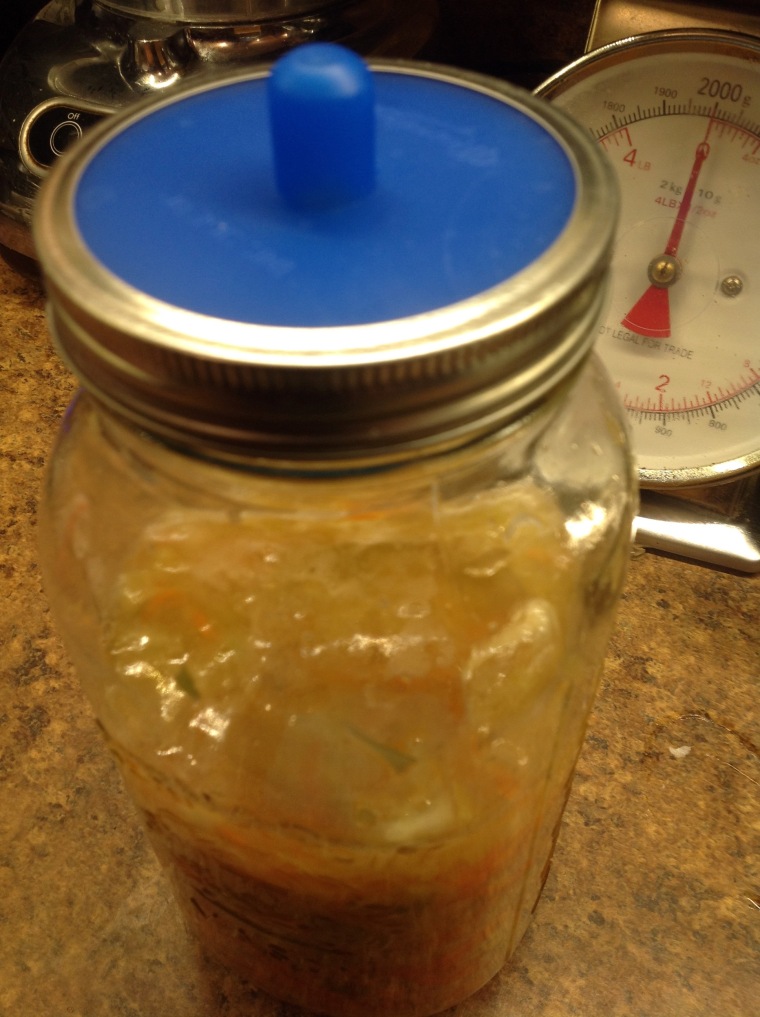 And then I left it to ferment! Here it is the next morning. You can already see foam forming. 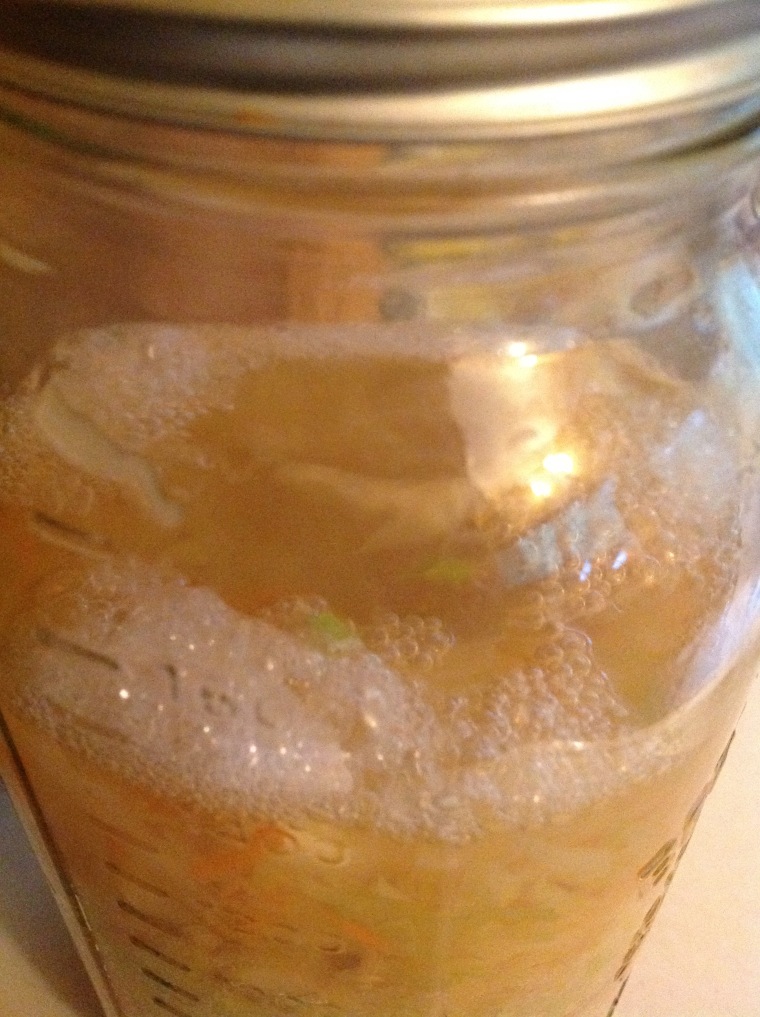 And by the evening, the slaw is fermenting its way into kraut! 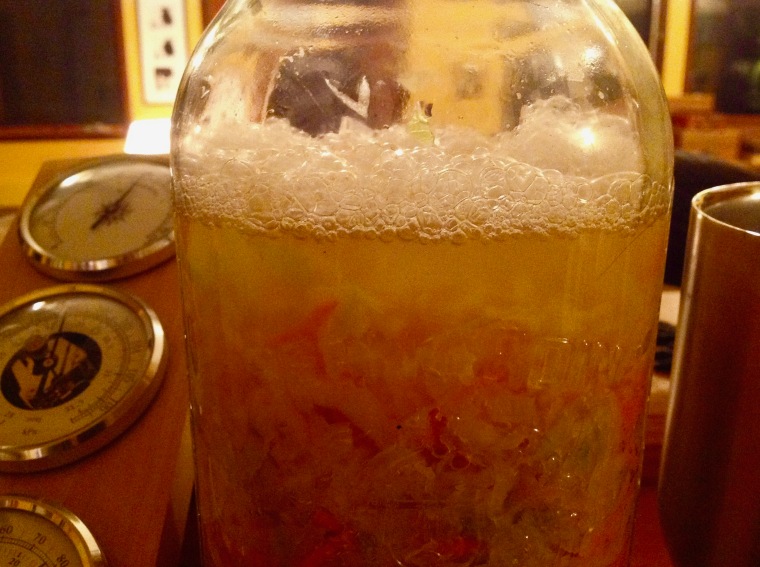 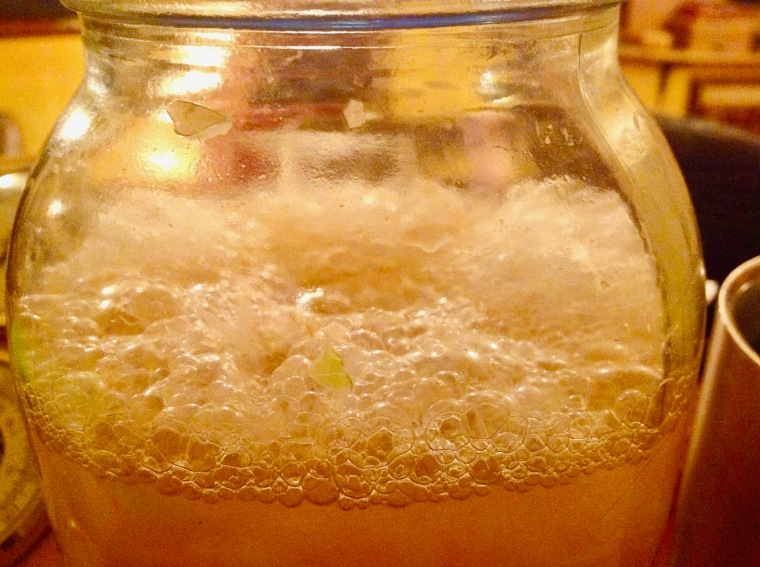 The ferment is apparently happiest at a temperature between 70 and 80 degrees, so I’ve parked it on the shelf behind the wood stove with a thermometer right beside it so I can check that my ferment is comfortable and, most important, growing lots of good bacteria!

The fermentation will go through several stages before it’s ready. At this stage–only one day into the fermentation process–the bacteria produced is called “Leuconostoc.”

According to biochemist, S.E. Gould, in Scientific American,

At this stage the surrounding environment is not acidic, just cabbagey. The bacteria, mostly Leuconostoc species, produce carbon dioxide (replacing the last vestiges of oxygen in the jar) and lactic acid, which is a natural byproduct of anaerobic respiration. Eventually, the conditions within the jar become too acidic for these bacteria to survive and they die out, replaced with bacteria that can better handle the acidic conditions such as Lactobacillus species.

So I’ll see you back here in a few days with an update on whether or not my slaw has become kraut!

I have to admit, I was a little worried about my kraut for the first week. The first two days (as I mentioned above), the mixture was bubbling up a storm from the Leuconostoc species of bacteria. The bubbling died off with that species of bacteria, and then it was, frankly, kind of stinky for a day or two and I thought it had gone off.

I was prepared to scrap the experiment altogether, but left it for a few more days and the smell passed. The entire mixture started to float, however, and I realized I’d been adding water when what I really needed to do was push down the kraut, so that’s what I did. I also added another pickle pebble to weigh it down.

By day ten, several days had passed without my opening the jar. Upon opening, no smell was evident, nor was any mold, so I figured I was safe. 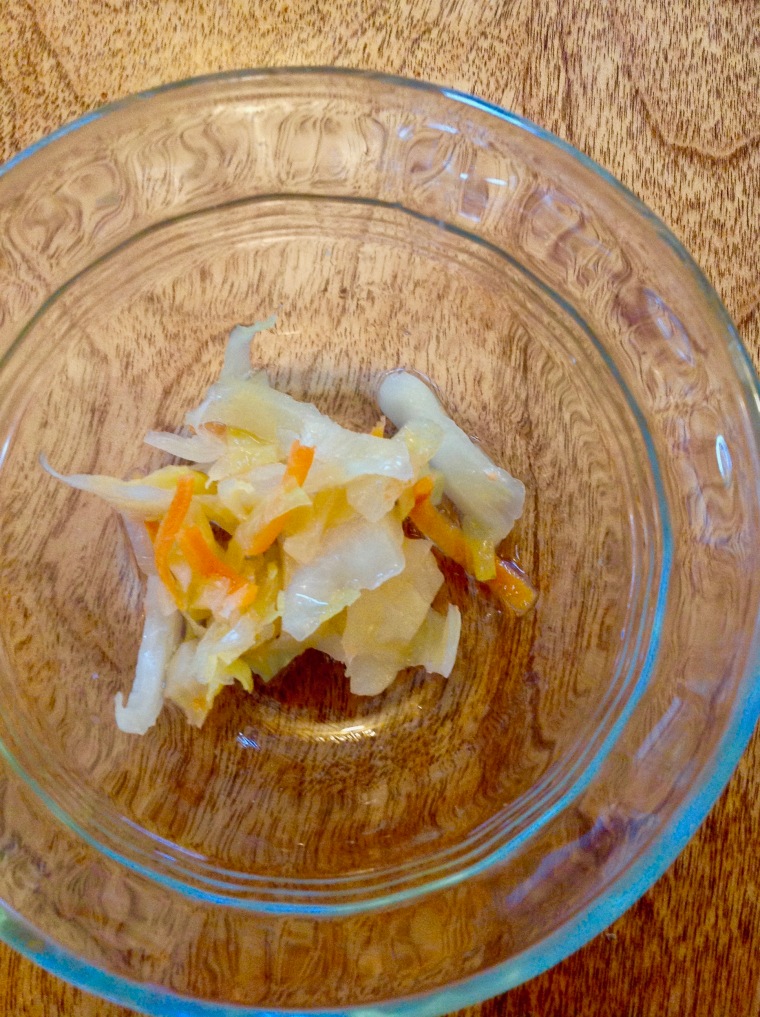 I extracted a bit to sample and it was very nice and tangy…with a back flavour of dirty dishwater–haha! I think I’ll now leave it for another week or two to get even tangier.

The sauerkraut is PERFECT today! I had to stop myself from gobbling up the entire batch!

My next experiment will be with purple cabbage, shredded beets, and red onion! Should be colourful!