Our good friends, Bob and Susan were up for a visit last week, and we had a fine time walking along the water and through the woods and eating and drinking.

Bob and Susan have been vegetarians for decades, but recently started eating more plant-based meals, so we had a fully plant-based visit. My darling niece, Dana, was also up since her planned sojourn at her parents cabin on Hornby Island was interrupted by several fallen trees, and a resulting lack of electricity, water, and phone service. She had her lovely dog, Guinness, with her, which pleased everyone but Buster. 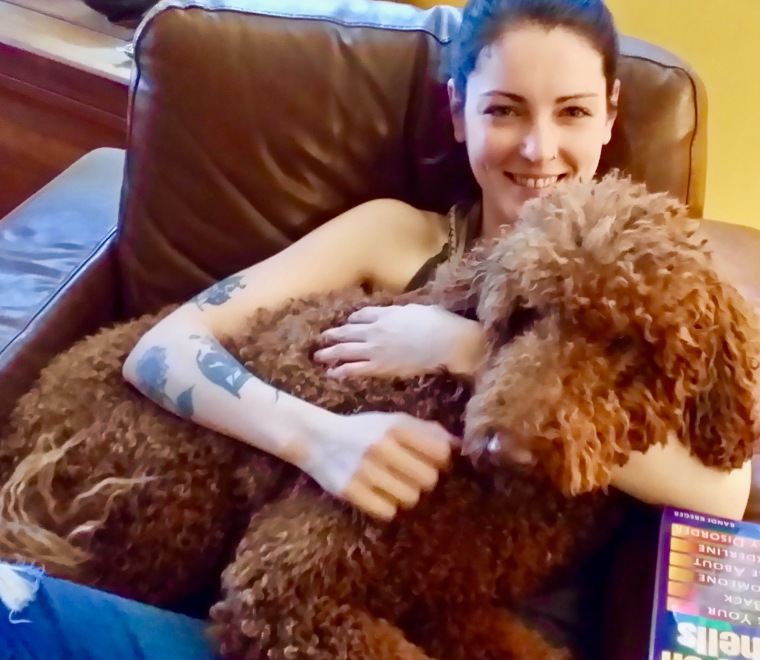 James was able to try out various recipes from his new cookbook: Vegan Cuisine by Jean-Christian Jury. The food he produced was fantastic–not a dud among the various dishes.

As an aside, we suspected one of the recipes contained an omission, so I e-mailed Mr. Jury and received a prompt reply, which included the missing sauce recipe!!

Susan also brought her new æbleskiver pan for us to try out, but with all our meals planned already, we didn’t get a chance to try it. Generous soul that she is, Susan left it here for me to try, which I’ve now done with great success!!

My first attempt was sweet: I used this vegan pancake recipe and just dropped a few chocolate chips into the centre of each. They were delicious–the centre became all gooey and chocolaty and the outside was nice and crispy. 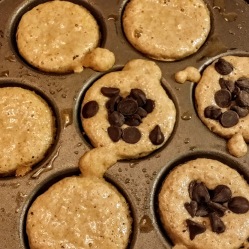 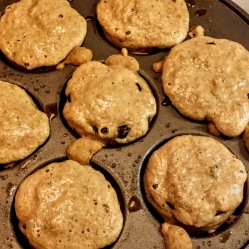 I decided to try a savoury batch next, so I made filled the pancakes with…

Mix together in a four-cup measuring cup and set aside:

In a separate bowl, mix together

Add the dry mix to the wet and mix well with a whisk. Let the batter sit for about three or four minutes. Heat the æbleskiver pan to medium high (about 7). Test with a drop of water.

There’s no need to oil the pan; just deposit a tablespoon of batter in each little pocket. In the same order, deposit a teaspoon of smoky cheez sauce in the centre of each pocket. It’s best if the cheez sauce has been refrigerated so it will be more solid. Top each one with a cluster of vegan bac’n crumbles and top with another teaspoon of the batter. 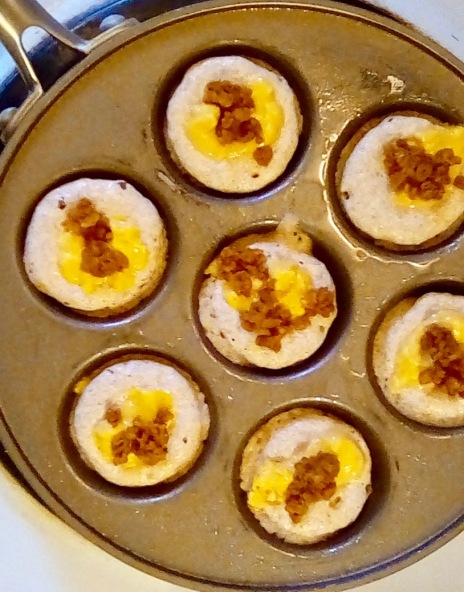 Next, use a couple of wooden skewer to gently turn the balls of dough in the pan…

Once the other side is brown and crispy, they’re done! And there you have it…mini grilled cheez and bac’n sammies!!

The cheez becomes runny from the heat–so, SO good!! 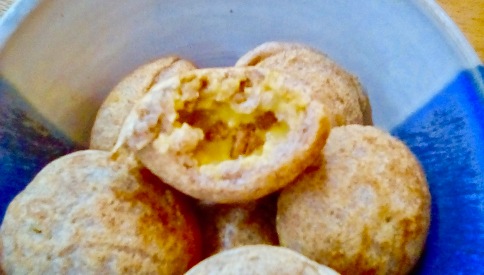 They taste great dipped in this dill dressing or, I imagine, ketchup…if you happen to like ketchup (which I don’t).

This would be a great treat for kids too…as would the chocolate chip version!

The song of the day is Gregory Alan Isakov’s “Master and a Hound,” because it’s an amazing song, but also because I find the lyrics compelling, yet completely puzzling. A number of people online have mentioned that Isakov has said the song was inspired by a snow globe (given to him by a friend). Someone also mentioned he said the song reflects his difficulty adjusting to life in California. Most people interpret the song as reflecting a father-son relationship. I spent a good hour attempting an analysis; then, James came upstairs, read the lyrics, and argued with me for another half an hour over our different interpretations. He thinks the song reflects a romantic relationship; I think it reflects a parent-adult child relationship. And yes, yes, this is how a couple of former English instructors spend their time. What a couple of doofuses.

Anyway, it’s a lovely song. Here are the lyrics:

“Master and a Hound”

Master and a hound
Turned a circus swinger
Look, he’s coming down…
Down