I know, I know….I JUST posted a healthy bread!! THAT was a seed-nut bread though! This is a healthy sandwich bread!

I adapted the bread from a recipe I found online that called for 1/3 whole-wheat flour and 2/3 white flour–I thought I’d try a mix of 1/3 whole wheat, 1/3 sprouted spelt, and 1/3 white. I also added a bit of vital wheat gluten because of using the lower protein flours and adding the seeds, quinoa, and oats.

Leave for half an hour. Next add…

Mix until no dry flour appears and put in a large jug.

The dough will be shaggy, but nowhere near as shaggy as the no-knead white loaf.

Leave on the counter until the dough has risen to the top of the jug. Place in the fridge until you fancy a loaf of bread.

To make a loaf, tear off a baguette or boule-sized hunk of dough (about a pound) and shape loaf.

Let the loaf sit on the oven while it heats up to 450 degrees. It’s ideal if it achieves room temperature.

Pop the loaf in the oven and pour a glass of water into a roasting pan beneath the loaf.

Bake for 20 to 30 minutes. Once the bread achieves an internal temperature of 207 degrees, it’s done! You’ll notice that the vital wheat gluten creates a VERY structured bread–in fact, I shaped the loaf like a softball assuming it would flatten down a bit. It did not! It’s a vibrant little loaf though! Quite dense, but a nice complex flavour and a perfect crust. The nuts, quinoa, and oats are not discernible within the bread at all, though you can see a few quinoa grains on the crust.

Here’s a good video on the technique (though the recipe is different):

If you want a softer crust for sandwiches, bake in cast-iron enamel-covered covered casserole dish for 30 – 40 minutes. 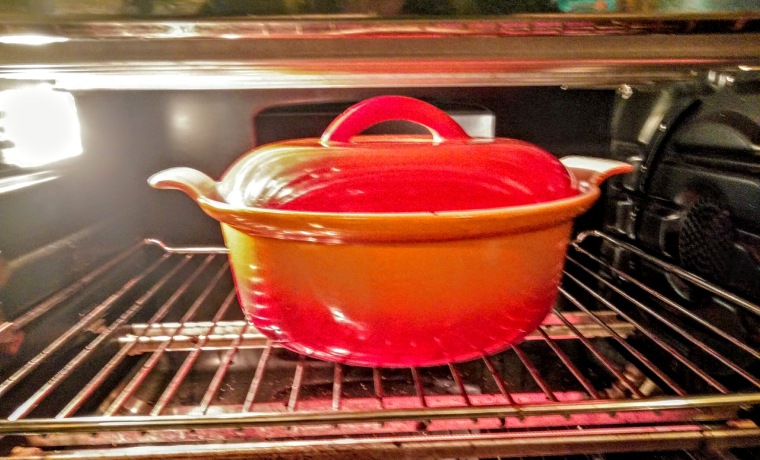 And look at the amazing sammies this toasted bread makes!!! 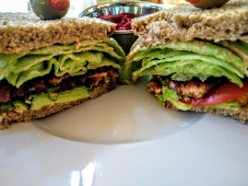 And the song of the day is Don McLean’s “And I Love You So” because James was just playing it (and I love it when he plays that song!). We arrived back from dinner at The Thatch with Bid and Paul and James sat and played his guitar for a good hour and a half! The poor man will have blistered fingers!