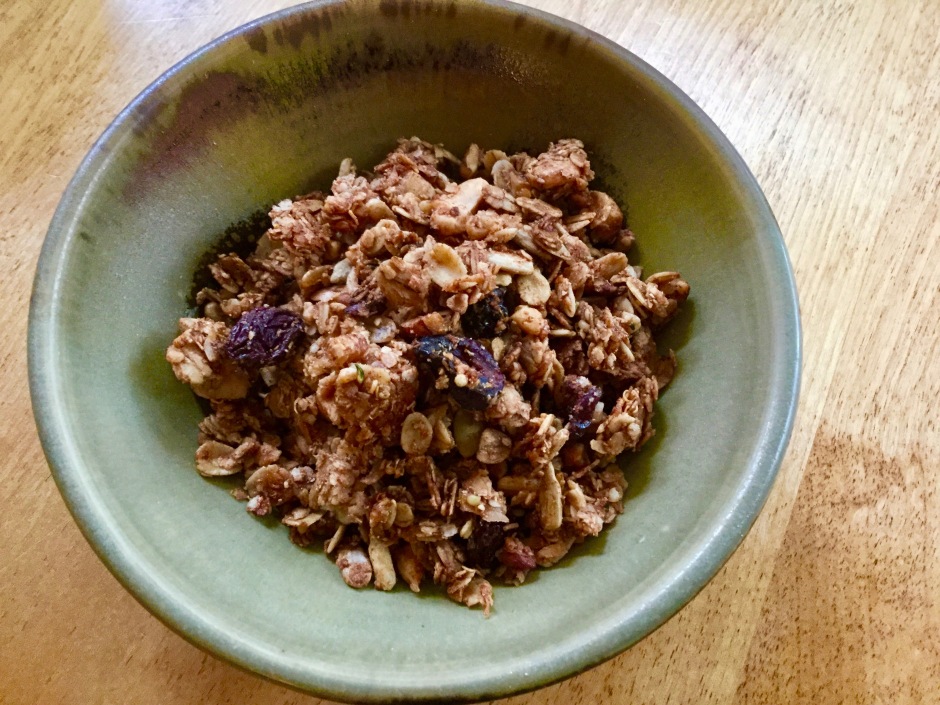 When James and I first moved in together, he surprised me by becoming vegetarian. So shocked was I with his decision that I would make him a huge eggy-cheesy breakfast every morning in the hope that he’d see how great vegetarian food is and not change his mind. And in the decade or so we’ve lived together, he never has.

Then, in January, 2016, he surprised me again by declaring that he’d join me on my plant-based adventure, with the proviso that he may occasionally still eat dairy. Since I regularly fall off the wagon myself, the plan seemed reasonable enough.

From that day forward, James’ usual breakfast has been a gigantic bowl of Raisin Bran covered with a sliced banana and a rather generous sprinkling granulated white sugar (the boy loves his sugar!).

He’s been tiring of his regular cereal lately, however, so I’ve been trying to convince him to let me make him some fabulous, healthy cereal to replace it. He’s been sceptical about my proposal, but finally accepted yesterday!

Since any extracted oil isn’t really healthy, I just used coconut oil, but since it’s saturated, I might rethink that in future.

As for the sugar, date sugar or date syrup is the healthiest form according to Dr. Greger, so I used 1/4 cup of date sugar and a 1/4 cup of maple syrup (because what’s breakfast without something maple-y?!).

As for the grains, nuts, seeds, and fruit, I figured I’d try to include as many different forms as my pantry would allow. Thus, I included oats, quinoa flakes, pecans, walnuts, almonds, hemp seeds, pepitas, sunflower seeds, unsweetened coconut flakes, dried cranberries, dried pineapple, and raisins.

And because I’ve been working on my mis en place in my Rouxbe cooking class, I thought I’d create a visual recipe today…

Next spread the mixture on two parchment-paper-lined cookie trays and bake at 350 for about twenty-four minutes. Stir the mixture halfway through, turn the pans, and press the mixture down to create some nice chunks.

The recipe I used for the proportions is from Cookieandkate.com. I discovered Kate Taylor’s amazing blog only recently and the recipes I’ve tried have been excellent! The recipe that gave me the idea to include quinoa was this one from The New York Times. As I said, I ended up using quinoa flakes because the popping experiment was a bust.

Kate says this recipe makes sixteen servings, but I have no doubt that once James tastes this deliciousness, he’ll be eating double portions every day. Since he spends two hours on his exercise routine every morning and then spends the rest of the day stacking wood, cleaning the roof, mowing the lawn, etc., etc., I figure he can eat as much of it as he wants. I’ll just make him more when he runs out!

And the song of the day is Michael Kiwanuka’s cover of Led Zeppelin’s “Ten Years Gone” because this video appeared in my mailbox this morning from my friend, Bob, and it’s just lovely…